The U-17 football World Cup has taken India by storm. FIFA has already declared that this World Cup is some steps behind making a record in terms of attendance. With the quarter finals lined up from today, India is eagerly waiting to see some of the world-class actions from the colts.

At 5ft 4inches, Alan De Souza Guimaraes, does not seem to be much a threat for the opponent team. But the attacking midfielder from Brazil is consistent in his performance in the Under-17 World Cup. His skill has proved to be fruitful for Brazil’s all-win result in the tournament. Alan was the provider of the first Brazilian goal in Kochi against Spain, sending in a fine low cross for Brenner, who slotted the ball into the net. It was his first assist of the tournament.

“An assist is like a goal – it’s another way of helping my team-mates and that’s what makes me most happy.”

The Brazilian hottest No 10 was rested for his country’s third group match against Niger, due to the fact he had a yellow card looming over him. Till now Alan has only one assist to his name, but he has acted as the foundation for Brazil’s powerful attacks.

“There’s a lot of quality here, and I’m just another good player. We all have the same mentality, and that’s what will help the team to keep winning.”

Alan has a natural flair in the art of setting up goals. He has proved this at the 2017 South American Under-17 Football Championship in Chile, where he recorded six assists in nine matches – more than any other player.

“We always look for a pass if that pass is going to find a team-mate who’s better placed to put the ball in the net. There’s no selfishness in this team.”

Alan’s coordination with Vinicius Junior, who missed this World Cup due to technical problems, is much talked about. Vinicius’ goals on assists from Alan were instrumental in Brazil winning the Under-17 South American Championships.

“I like to play with Vinicius. He gives me lot of options when I line-up my passes.”

The wonder kid is already compared with the great Ronaldinho for his plenty of skill and technique. It is coincidental that Ronaldinho also wore the No 10 jersey in a previous Under-17 World Cup years ago. Its some of those qualities of Alan that has attracted Spanish giants Real Madrid to sign the teenager once he turns 18. Real have already acquired the services of Vincius Junior as he is set to join the club next year after turning 18. Now its Alan’s turn to join the big league.

“Palmeiras’ fans already know who I am; I want to break into their senior team first before making any kind of move, and if I do well at the U-17 World Cup maybe that’ll happen. I’m in no hurry to leave the club.” 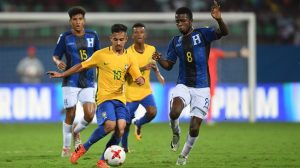 But recently a Spanish daily, based in Madrid, carried a headline: ‘El ‘crack’ brasileño que se cuela en la agenda del Madrid’. Its literal translation is, “The Brazilian ‘crack’ that sneaks into the agenda of Real Madrid.” Beneath the headline was the picture of Alan De Souza Guimaraes, running towards his teammates, after scoring a goal. The newspaper even coined a very Brazilian name for him — Alanzinho.

In the middle of the story there was a video-compilation of his maiden hat-trick for Brazil against Chile in the South American qualifiers for the U-17 World Cup. The first was a free kick from 25 yards hit by his left-foot that made an arc to squeeze through the tiny space between two Chile defenders into the nets.  His second was also a free kick that bounced awkwardly to confuse the goalkeeper. The third was an effortless finish, more like a clinical striker.

“I hadn’t scored a goal until that match, and so was a little sad. Then when it came, it was a hat-trick.”

Though scoring goals is not basically his business, still he loves to do so. But he was more of a defensive sort when he appeared for trials at the Sao Paolo Academy back in 2013. His short stature was always a disadvantage and the bigger boys used their physicality to push him back. He has to really fight against them to get the possession.

“There’s room for tall, medium-sized and short players in football. My lack of height gives me greater speed and helps my overall game. Just look at Messi and Iniesta, who’s my favourite player. It’s not a problem.” 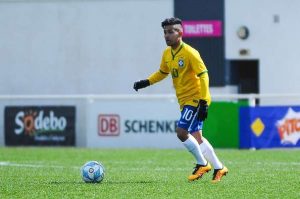 When Brazil will play Germany in the quarter finals at the Yuva Bharati Krirangan in Kolkata, Alan will not have a dearth of cheers as most of Kolkata are Brazil supporters. He will be completely at home there and may be that will prompt him to score his first goal of the tournament. And back in his mind Alan knows that a single goal will open far more opportunities, far more vistas and a highly respectable future.