India’s Deaflympics 2021 contingent, 65 athletes participating in 11 sports disciplines, was given a warm send-off by Youth Affairs and Sports Ministry. 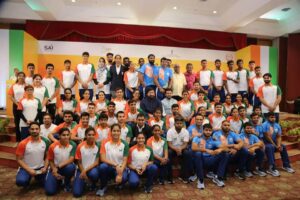 The 24th edition of Summer Deaflympics is scheduled from May 1 to May 15 at Caxias do Sul in Brazil. India is represented by 65 athletes- the largest contingent ever in the Deaflympics. They will participate in Athletics, Badminton, Judo, Golf, Karate, Shooting, Swimming, Tennis, Table Tennis, Taekwondo and Wrestling.

The 1st edition of Deaflympics was held in Paris in 1924. It was the first ever international sporting event for athletes with disability. Since then the event has been held every four years, apart from a break for World War II. The 24th edition was delayed by a year due to the worldwide pandemic. 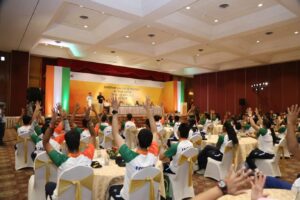 This is the 14th time that India is participating in Deaflympics since making its debut in 1965. In the last Deaflympics in Turkey in 2017, India was represented by 46 participants . It bagged five medals including one gold, one silver and three bronze medals.  The sole gold medal winner was wrestler Virender Singh.

The send-off ceremony was attended by the Union Minister of Youth Affairs and Sports Anurag Thakur and junior minister Nisith Pramanik.