Abhishek stays quite some kilometres away from Mumbai. But the place where he belongs to has given him the opportunity to play a sport that is rarely played in India. Brush with a squash court in his childhood with some seniors playing the game enthusiastically had inspired Abhishek to start playing squash. The speed of the game attracted him, so was the agility. But gradually he understood that squash not only keeps him immensely fit but simultaneously it fills him with such a positive energy that helps him to do other daily activities with increased vigour.

The 22-year old graduation student, Abhishek has been practicing in Jindal Squash Academy near Mumbai since 2006. His highest ranking in India for Juniors under 19 was 3 and he had played squash with top players of India including Saurav Ghoshal, Harindarpal Sandhu, Mahesh Mangaonkar, Ravi Dixit and others. Squash had opened a complete new world for Abhishek. He keeps travelling, meets new people, interacts with them and thus, has grown tremendously as a player and also as a human being. He is looking forward to play this sport in national and international circuit for many years.

But to play in international circuit, he needs to have sponsors. He has been in touch with some companies. For the time being, Jindal Squash Academy promotes him tournament-wise and recently Head has promised him to sponsor his playing equipment. But sometimes it really becomes hard for Abhishek to travel and meet the expenses to play in tournaments. So, he had found a new way to promote himself. 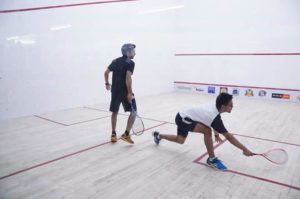 He completed a course of coaching and is now a certified Level 1 Coach from World Squash Federation. He coaches at Juhu Gymkhana and Otters Club where more than 20 kids play every week. The money he earns is spent in playing tournaments in squash circuit.

But he never forgets the role of some very important persons for whom he has stuck to this game for these many years. He had his parents always by his side. Next are his school teachers and friends who had always encouraged him to go to tournaments and play. He never had to think of any backlog of his studies or home works.

Though squash has to go a long way in India, still he is quite positive about the growth of this sport here. He has seen young kids playing squash with lots of passion but what lacks is proper exposure for them. That makes them to lose interest in continuing it in India and eventually many apply for scholarships in foreign universities. A standard player gets a call from those universities that give importance to squash. He/she goes there, studies, plays for the university and perhaps gets a well-paid job as a coach.

But this bleak scenario has not stopped Abhishek from continuing his favourite game. Everyday in the morning he wakes up, takes up his racquet, jogs towards the court and start smashing the ball, sometimes with a partner but most of the times alone. Its his battle; its a challenge that he is eager to accept throughout his life.