The 2022 Commonwealth Games was officially declared open by Prince Charles at the Alexander Stadium in Birmingham. The Alexander Stadium witnessed a perfect blend of rich British history with colour, light and dance while the 22nd edition of the Commonwealth Games was opened at Birmingham. The Games is set to be the biggest and most expensive sporting event in the United Kingdom since the 2012 London Olympics. This is the first multi-discipline sporting event after the worldwide pandemic which is taking place without any COVID restrictions.

The Games was declared open by Prince Charles who was the chief guest for the occasion. He arrived after around 70 cars in red, white and blue got together to form the Union Jack. The formation of cars was a tribute to the city’s rich history of motor industry. 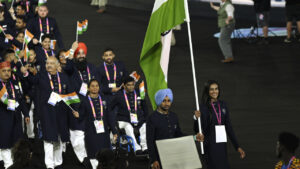 Athletes from over 72 nations and territories have entered the Commonwealth Games. In the Parade of the Nations, the Indian contingent was led by Olympic medalist PV Sindhu and the Men’s Hockey team captain Manpreet Singh.