The 8th Senior National Championship of Dueball is scheduled from 10th-12 January at RTMNU, Nagpur University Ground in Nagpur, Maharshtra.

Considered as one of the fastest-growing sport in India, Dueball originated in Nagpur when, nine years ago, sports enthusiast Firoz Khan developed a new sport by combining the rules and techniques of Basketball, Handball and Football.  Since then Dueball has grown at a surprisingly fast pace and has crossed the boundaries of India to reach to 25 countries across the globe. 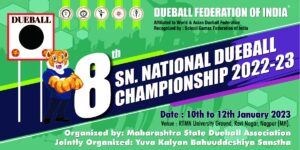 After seven successful editions, the 8th Senior National Championship of Dueball is going to be held at Nagpur from 10th January 2023. There will be 28 Men’s team and 24 Women’s team from across the country participating in this 3-day event.

According to Maharashtra State Dueball Association, this tournament has drawn the attention of many international sports dignitaries. Nutcharut Klamthawee and Niphon phUekKert from Thailand Dueball and Ahmed Adhuam, General Secretary of Maldives Dueball Federation will be attending this mega event.

Apart from them officials from Ministry of Sports and Youth Affairs, Government of India will also be attending the Championship. Sneha Jamsandekar- President of Dueball Federation Of India, Vasu Rukhar- Vice President of Dueball Federation of India, International hockey player Anwar Khan, Akhlaq Alam- CEO of Samna Enterprise and Parinay Phuke- MLA of Nagpur will be present. 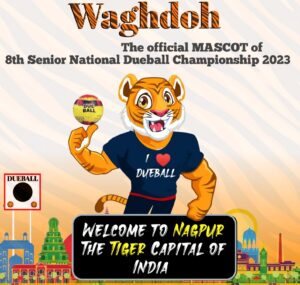 To pay tribute to one of the oldest and biggest tigers in the wild, Wagdoh, the organisers have declared him as the mascot of the tournament. Wagdoh, who spent 17-long years in Tadoba-Andhari Tiger Reserve and died in May 2022 has become an integral part of Nagpur’s culture. Through this integration of culture and sport, Maharashtra State Dueball Association and Yuva Kalyan Bahuuddeshiya Sanstha want to showcase the rich heritage of Maharashtra in front of world delegates.