The Indian Wrestling contingent were in a medal rush as all six wrestlers in action won medals with three of them winning gold.

It all started with Bajrang Punia who won his 3rd Commonwealth Games medal and his second successive gold medal in the Men’s 65kg competition. The defending champion beat Naurau’s Lowe Bingham and Mauritius’ Jean Guyliane Joris Bandou ‘by fall’ before winning by technical superiority against England’s Geroge Ramm. In the final,  Bajrang but the Indian was far superior to Canada’s Lachlan Maurice McNeil in technique and stamina as he won the bout 9-2. 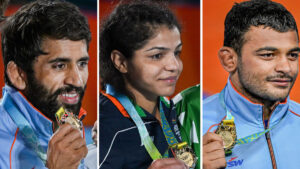 Sakshi Malik, the Rio Olympics bronze medalist won her maiden Commonwealth Games gold be defeating Ana Paula Godinez Gonzalez of Canada in Women’s 62kg. Sakshi was clearly emotional as the Indian national anthem played at the Birmingham Wrestling arena. She was going through a difficult time as she failed to make the Tokyo Games and was also removed from the Target Olympic Podium (TOPS) scheme.

23-year-old Indian wrestler, Deepak Punia stole the show in the 86kg category final when he defeated 2-time gold medalist Muhammad Imam of Pakistan to win his maiden gold medal at the Commonwealth Games 2022.

Anshu Malik had to settle for the silver medal in the Women’s 57kg as she lost to defending champion Odunayo Adekuoroye of Nigeria in the final.