Indrajeet marathons with grit from Tillikapur’s lanes to synthetic tracks

Indrajeet Patel is from one of the remotest villages of Allahabad. Located in Soraon district, Tillikapur does not have some basic livelihood facilities. In his childhood, Indrajeet had never seen an athletic track but was attracted to running. Being a farmer’s son, he helped his father in their field and in his free time he ran around there effortlessly. At the end of a day’s work he ran breathlessly to a big ground where a group of army men played football, handball or volleyball. Indrajeet watched them; he eagerly wanted to play but was not allowed in the team for being a child. But nobody could stop him from running. Though being a boy he ran with men, maybe in the side lanes, but those runs were the pathways of a career filled with determination, patience and endurance.

Indrajeet’s passion for running did not go unnoticed among his family members. Maybe they could not afford him right nutrition or proper training; even they could not afford him a pair of running shoes, but they always encouraged him. This encouragement led him to the district level competition and barefooted he emerged champion in 1000 metre and 500 metre. Indrajeet still remembers that day when he came back home with the medals. “My parents were so happy, specially my grandmother who often kept aside the most nutritious food for me,” says an emotional Indrajeet. 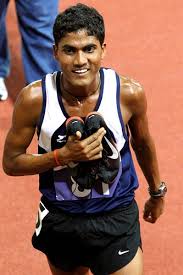 It was during that time, the adolescent bought his first shoes. He was overtly happy to have a pair and did not want to open them. If he had to open, then would carry them pressed on his chest. His respect for shoes had remained unchanged as he still carries them very close to his heart.

Indrajeet’s national conquer started when he won the 3000 metre run in Asian Area Qualification Championship in 2010 held in Singapore. He is the junior national champion in 5000 metre and 1000 metre. But till date Indrajeet’s greatest achievement are 2 gold medals in 2014 and 2015 Mumbai Marathon. In 2014 he was just a 20-year-old to clock 01:04:56 and win the race.

Today, Patel has a job with ONGC with which he is supporting his family. But like any other sportsman who is not a cricketer, he knows that survival is not easy in India. Indrajeet says, “Although we work equally hard to gain medals for our country, our achievements are unnoticed. Athletes like me want money but more than that we want recognition to carry on our dreams.”  And now his only dream is to qualify for the 2020 Tokyo Olympics for which he is working hard in Bengaluru training centre. Indrajeet is aware that in 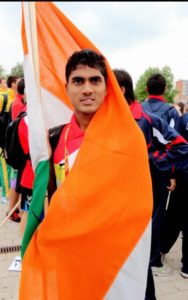 India there is no dearth of facilities but what is lacking is proper use of those things.  So he tries to use the facilities to the maximum during his training. He knows that intense practice, hard work, energy and speed can fulfill his dream. Back home at Tillikapur, his mother is eagerly waiting for that day when his son will win an Olympic medal for the country. And so there is no time for rest. Indrajeet wants to win; he wants that for his mother, his village and his country. So, Indrajeet runs and runs; the legs pain but he enjoys the pain. He conquers it as he knows that it is the only way to be victorious.