Kaustubh Khade proudly sails India in the sea of kayaking

“There is obviously the rush of big waves, the threat of being thrown out, but what I love most is the beauty of being 3-4 km away from land and seeing things you’ve never imagined. Flying fish or dolphins; the sea filling up with jellyfish; fishermen diving to bring up mussel; lighthouses & big ships or windmills and hills. I can think of at least one thing everyday that is different than the rest,” Kaustubh Khade announces profoundly.

A chance occurrence with a kayak dealer in Panjim changed the way things were with Kaustubh Khade. Some 9 years back, Kaustubh, a bright IITian, was in Goa with his friends. He took to kayaking on that trip and was so inspired by the sport that he thought of buying a kayak. Suddenly, he met kayak dealer Rajiv Bhatia who offered him to undergo some training sessions in Mumbai. Over the next 2-3 months, Kaustubh trained under Rajiv and instructor Pradip Patade at Rae Sport Academy in Mumbai.

Kaustubh Khade started participating in events and that fetched him confidence to continue the sport. It was almost after 1 and ½ years of kayaking, he got a chance to train under the 12-time World Champion of Surfski, Oscar Chalupsky. After his first session with the champion, Kaustubh felt disheartened as the master disapproved many of his techniques. But when a powerhouse like Chalupsky criticizes, then it’s priceless. Kaustubh completely surrendered under him to learn the best and thus, his techniques became perfect that helped to increase his tenacity to carry on out on the water for hours. 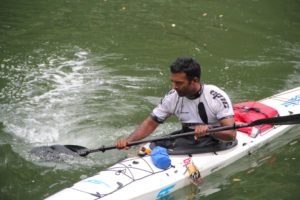 Kaustubh, then, was well-placed with a white-collar job. But things were definitely shaping up in a different way as he attended office and kayaked in his free time. During those days, the young kayaker often remembered the words of his IIT roommate Ritesh Pandey. He often told him that it was acceptable to live without the trappings of an IITian’s life. But, it took a while for Kaustubh to be completely convinced with that.

In 2015, when Kaustubh decided for a Mumbai-Goa expedition, he was due for a promotion. In spite of knowing that a sabbatical from work would be degrading for his career, he went on with his decision. His parents were absolutely supportive and it was his mother who said to do what he loves the most. His father, on the other hand, sorted out permission letters and certificates from the authorities. Perhaps the sparks in Kaustubh (as at that time he had already won 2 silvers and 1 bronze in Asian Dragon Boat Championship) persuaded his parents to support an unusual choice.

While at home it is his parents who encourage him, during the expeditions the support comes from Shanjali, his constant companion. Shanjali Sahi is a trained cyclist who intends to become the first woman to cycle around whole of India. During the Mumbai-Goa excursion, she took off from work to be on Kaustubh’s support boat and in 2016 during Kautubh’s Kutch to Kanyakumari expedition, she left her job. There were many moments when the physical or mental exertion for both of them was immense. But they healed each other and hit the water or the road again. 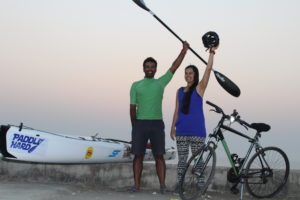 “Another inspiring factor for me is people’s response at the stopovers. They are first curious but later get blown away with what I am attempting,” Kaustubh firmly says. This definitely helps him to sail across the coasts one after the other. But he is always eager to represent his country in international events. “I bank on the thought of kayaking for India often because representing so many people boosts my confidence,”  Kaustubh says.

But either representing India or kayaking solo, what troubles Kaustubh is the lack of exposure for adventure sports here. Lack of coverage makes it hard to find sponsors. Though being a medalist in Asian Championship and having a record of Longest Solo Kayaking, it was tough for Kaustubh Khade to get sponsors for his West-Coast expedition. But finally, when SF Watches came on board, he felt that the risk had paid off.

Kaustubh intends to participate in the World Championship. He wants to be in a race with Oscar Chapulsky again. But for now, he is content with the task at hand and that is to complete his coastal trip around India.