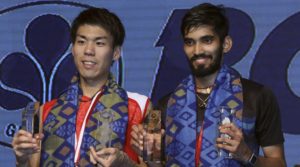 Previous Srikanth through to the finals, Prannoy out of Indonesia Open
Next India record their biggest win against Pakistan in hockey