UPDATES
Home / EXCLUSIVES / BEYOND THE LIMITS / The King Is Back; Garry Kasparov returns to chess

The King Is Back; Garry Kasparov returns to chess

The youngest ever undisputed World Chess Champion at age 22; ranked world No. 1 for 225 out of 228 months; had a peak rating of 2851, have a record of 15 consecutive professional tournament victories and 11 Chess Oscars. That’s Garry Kasparov-the genius, the ‘monster with 100 eyes, who sees all’, the man who was invincible for almost two decades. Garry Kasparov left chess in 2005. But now, after 12 years, the king is back. He will appear at the Saint Louis Rapid and Blitz tournament as one of four wildcard picks and will be playing against nine top players. The event is part of the prestigious Grand Chess Tour, a set of tournaments that is bankrolled by US philanthropnist Rex Sinquefield and seen as a rival to the events organised by Fédération Internationale des Échecs  (FIDE), the official world governing body for chess. 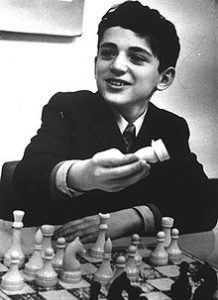 Born Garry Weinstein in Azerbaijan to an Armenian mother, Klara Shagenovna Gasparian and Jewish father, Kim Moiseyevich Weinstein, Garry Kasparov started learning chess from the age of 7 at Young Pioneer Palace in Baku. It was at this age that he lost his father. It was from this time that Garry’s life was predominantly influenced by his mother and this is proved when he decided at a young age of 12 to adopt his mother’s Armenian surname, Gasparian, russified as Kasparov.

An intelligent child from childhood, Garry Kasparov began training at Mikhail Botvinnik’s chess school under noted coach Vladimir Makogonov. This was a phase in his life when he developed his chess philosophy. He admitted this later in the book ‘Test of Time’, “I am sure that the five years I spent at Botvinnik’s school (1973-1978) played a decisive role in my formation as a chess player and determined the path of my subsequent improvement.”

In 1976 Kasparov won Soviet Junior Championship and repeated the achievement one year later. From then onward he kept on winning tournaments and in 1983 became number 2 rated player in the world, trailing only to Anatoly Karpov. It was the beginning of Kasparov-Karpov period in chess history, the first of the encounters being played in 1984 World Championships.

The match between the two greats had many ups and downs. Karpov led in the beginning and was up 4-0 against Kasparov. Fellow players predicted he would be whitewashed 6–0 within 18 games. But Kasparov, ready for the fight, drew 17 successive games. He again lost game 27, then fought back with another series of draws. In the 32nd game, Garry Kasparov won for the first time against Anatoly Karpov. Another 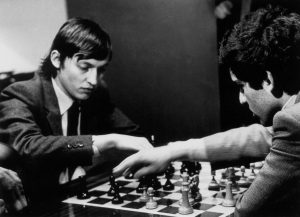 14 successive draws followed till the match reached to 46 games. It became the lengthiest World Championship match; the previous record length for a world title match had been 34 games, the match between José Raúl Capablanca and Alexander Alekhine in 1927. Kasparov won games 47 and 48 to bring the scores to 5–3 in Karpov’s favour. But suddenly this epic encounter was controversially abandoned without result by Florencio Campomanes, the President of FIDE. He announced that a new match would start a few months later. The termination of the match dissatisfied both the players. But Campomanes cited that the length of the match had taken a toll on health of the players, as Karpov had already lost 8kg during the match. 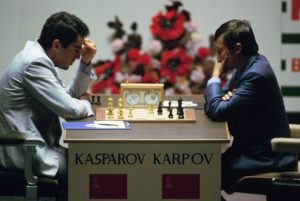 player to win 12 and ½ points in the best of 24 games would claim the World Champion title. However, in the event of a 12–12 draw, the title would remain with Karpov. Garry Kasparov matured within the time span between the two matches and it was proved as he led 12-11. In the last game, Kasparov did not give any chance to Karpov to level the match and won one of the masterpiece game in chess history with Black, using a Sicilian defense. Thus, Garry Kasparov was crowned the youngest World Champion at the age of 22 breaking the record held by Mikhail Tal for over 20 years.  Eventually, he went on to defend his title against Karpov in 1986, 1987 and 1990.

But the strained relationship between Kasparov and FIDE that started during the match of 1984 was never nullified. Division in the chess world was evident as Kasparov was supported by some noted Grandmasters. Finally, in 1993, Kasparov broke ties with FIDE and created the rival Professional Chess Association (PCA). He himself organized a World Championship match against Leigh-born Grandmaster Nigel Short under PCA’s umbrella. He won the breakaway match that was broadcast live on Channel 4. Thus, chess world got two World Champions as Kasparov claimed the PCA title while Karpov took the FIDE title. 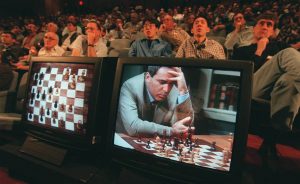 With his path breaking achievements in chess, Kasparov already proved his mettle to be considered as one of the greatest chess player in the world. But nobody had imagined his announcement to play against IBM’s ‘Deep Blue’ supercomputer. It was a pair of six-game chess matches between Garry Kasparov and Deep Blue. The first match was played in Philadelphia in 1996 and won by Kasparov. But in the second match, played in New York City in 1997, he lost to Deep Blue. The computer’s win was seen as a symbolical evidence of artificial intelligence defeating human intelligence as Kasparov was one of humanity’s greatest intellectual champions. Kasparov later claimed that he was unable to study Deep Blue’s games beforehand. 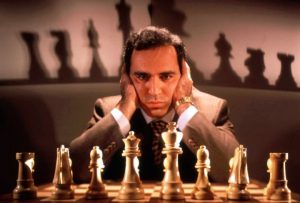 Three years later, in 2000, Kasparov lost his world crown to Russian Vladimir Kramnik. Just a year prior to this, Kasparov played the greatest game of all time, his ‘immortal’ match against the Bulgarian Grandmaster Veselin Topalov. He himself claimed that it was the greatest game of chess he ever played. Even after losing theWorld title, the great Garry Kasparov won a series of major tournaments, and remained the top rated player in the world, ahead of both Kramnik and the FIDE World Champions. But on 10 March 2005, after winning the prestigious Linares Tournament for the 9th time, Kasparov announced his retirement from serious chess.

Revolt Against The Rule

Always a rebel, Garry Kasparov wanted to pursue politics and therefore, founded an opposition movement called The Other Russia that accused President Vladimir Putin of returning the country to its dictatorial past. He even tried to run against Putin in the 2008 Russian presidential election. But he was unable to resist Putin’s political power and had to withdraw his presidential candidacy. He was so frustrated with Russia that he left his country 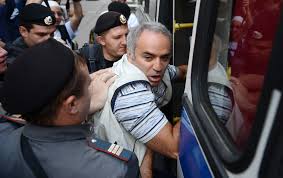 to settle as a citizen of Croatia.

But his revolt continued, and this time it was for the presidential chair of FIDE. Garry Kasparov attempted to dethrone the head of the World Chess Federation, Kirsan Ilyumzhinov, but here also he lost after securing only 61 federation delegates votes out of 175. Since then, Kasparov has become a prolific author and human rights campaigner.

Coming Out Of Retirement

But suddenly, Garry Kasparov took the chess world by storm again when he announced his coming out of retirement. “Ready to see if I remember how to move the pieces! Will I be able to announce my re-retirement afterwards if not?!,” Kasparov tweeted sarcastically. The tournament at St Louis will also have current world No 1 Magnus Carlsen of Norway and No 2 Hikaru Nakamura. While he will not face Carlsen, Kasparov, who is in the Rapid and Blitz competition, may go against Hikaru Nakamura or the 26-year-old Russian Sergey Karjakin.

Garry Kasparov idolized Bobby Fischer from his childhood. He dreamt of playing against Fischer someday but that never happened as Fischer left competitive chess in 1972. Perhaps, Kasparov wanted to have a resembled life like Fischer and so just like his idol he came back to the game post-retirement. Bobby Fischer reappeared in 1992, almost 20 years after his sudden obscurity. Kasparov is also coming back after 12 years of his retirement. An unbelievable experience waits for the chess lovers and Kasparov himself could not believe this, “It’s a thrill to officially be returning to the game, and certainly not something I would have anticipated more than a decade after my retirement.”