UPDATES
Home / EXCLUSIVES / BEYOND THE LIMITS / Reality Check through ‘Real Kashmir’: The Football Club that’s the first from the valley to play in first division of I-League

Reality Check through ‘Real Kashmir’: The Football Club that’s the first from the valley to play in first division of I-League

Sportsavour Desk October 23, 2018 BEYOND THE LIMITS, EXCLUSIVES Leave a comment

It is only eight days from now that Srinagar-based Real Kashmir FC will play their first 1st Division match in the 11th edition of the I-League. Real Kashmir has created history by becoming Jammu and Kashmir’s first football team to qualify for the top tier. In May 2018, they won the second division league by beating Hindustan FC of Delhi by 3-2 in Bengaluru.

As Real Kashmir FC entered into history through the goals of Ifham Tariq Mir, Danish Farooq and Nadong Bhutia, the young bloods achieved something that was quite an uphill task. The club qualified for the top division of the I-League within two years of its initiation.

Kashmir, that is synonymous to blood and violence, terror attacks and infiltrations has a lot more on the other side of the coin. And that was what Shamim Meraj and Sandeep Chattoo wanted to prove. The two friends joined hands to create a revolution, more precisely a Football Revolution, far away from religious discrimination and political unrest. Meraj and Chattoo, one Muslim and the other Hindu, wanted to prove that the Kashmiri youth should not be recognized as stone pelters but should be identified as sportsmen.

The Football fan duo was quite disturbed by the portrayal of Kashmiri youth towards the entire nation. Themselves, being true Kashmiris, they thought it to be their duty to change the notion. Moreover, it was a time when Kashmir was totally devastated by the destroying flood. The youngsters were left at loose ends as they had no playgrounds to play or any other option to channelize their energy. So, Meraj and Chattoo further felt the need to do something for their fellow citizens.

It was a difficult task for both of them as formation of a Football club needed much time and money. Though Shamim Meraj is the editor of his family-owned local newspaper ‘Kashmir Monitor’ and Sandeep Chatoo runs a hotel business in the state, still it was a huge investment for them. But as saying goes ‘where there is will, there is a way’, the two dreamers made their dream real.

In 2016, Real Kashmir Football Club was formed. The club participated in their first national competition in September 2016 when they played in the Durand Cup. The club received a letter from J&K Football Association requesting them to participate in the Cup as all known clubs from the state were unwilling to participate due to the ongoing unrest.

Interestingly, Real Kashmir did not play a single match in the local League before playing the Durand Cup. It was sheer inexperience to accept the letter as they did not even have a proper playing XI. The team was a highly unprofessional one consisting of local players, with majority from the Jammu and Kashmir Bank. With such a team they played against the likes of Aizawl FC, Neroca FC, Dempo SC, Army and Air Force teams and predictably ended up last. They scored four goals in five matches and conceded 14.

It was indeed a ground reality but at the same time a great learning lesson. Meraj and Chattoo coordinated and put their heads together to change the scenario. In July 2017 Real Kashmir became the first club from the valley to play on foreign soil by playing four matches in Scotland. After their impressive performance in Scotland, the club officials dared to approach ex Rangers and Aberdeen player David Robertson to manage the team.

Already an experienced manager in different Scottish teams, Robertson agreed to coach the nascent side. But as he landed in a snowy Kashmir, he was shocked to see the lack of infrastructure. However, he took the challenge and continued his stint in India. Many coaches would have been deterred by the law and order situation in the valley. But Robertson stayed on as he found that things were not so bad there.

Real Kashmir proved a surprise package in the second division of I-League. They played on risky grounds but dribbled past their opponents to win the league and get promoted to the first division. “Considering that there is no proper football infrastructure in Kashmir, it is a big achievement for the club to have reached here. But it is just the beginning,” Sandeep Chattoo ecstatically said after the historic performance of his little-known club.

They want to carry on from where they left. The club has left no stone unturned to perform and cause a few upsets in the country’s premier league. Though running short of funds, the officials arranged for training at the renowned BVB Borussia Dortmund club in Germany. “We were the first team from Kashmir to play in Scotland. We are now the first youth team from Kashmir to visit Germany for a training camp,” the club officials revealed. 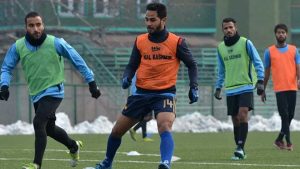 The founders want every Kashmiri kid either to play football or become a supporter. For them Football should not only earn them livelihood but also must become their way of life. The brightest examples are already in front of them in the form of Suhail Ahmad Bhat, Amir Rehman, Danish Farooq or Muhammad Hammad. All these young players who are in their early twenties were formerly in a troubled state in terms of not knowing exactly what to do in life. Moreover they had responsibilities towards their families that made them more vulnerable. But now they have the full support of their club and dare to dream bigger and better.

And along with these young guns, Real Kashmir has opted for six foreign players. Loveday Enyinnaya, the Nigerian professional footballer who has played for Indian clubs like Malabar United FC, Royal Wahingdoh FC, Sporting clube de Goa and Minerva Punjab FC, has been chosen as the team captain. David Robertson’s son is also one of the professionals who have joined the club this season. “We will only know how prepared we are when we play our first match. But it is a huge jump from the second division. Having said that, I think we are prepared for the challenge. We have had a good training camp both in the valley and in Mumbai,” David Robertson assessed.

The real Kashmir team is having some nervous moments prior to the big commencement. It is for the first time they will be playing against Indian Football giants like Mohun Bagan and East Bengal. Though the players were a bit relieved after they were assured of having 10 home matches at the picturesque TRC Ground in Srinagar, still there is a lot to worry about. Political instability, curfew and restrictions may force All India Footfall Federation to shift those matches in some other venue. Already the summit clash between Real Kashmir and Minerva Punjab FC in the J&K Invitational Cup has been cancelled. The two clubs were declared joint winners as the organisers could not see any possibility of holding the finals in coming days. Moreover, during peak winter, there is utmost probability of shifting the games to Jammu due to snowfall.

In the midst of these adversities, the club members have some good news to share. The commercial aspect of the club has also fallen into place as Adidas India announced its official partnership with Real Kashmir. Beginning with the 2018-2019 season, Adidas will become the official kit partner for the club. Speaking on this significant partnership, Dave Thomas, Managing Director of Adidas Group-India said, “Real Kashmir and its players have shown dedication and perseverance under difficult circumstances and we are proud to support them as they create history”.

We hope that these brighter aspects prevail. The gloom should disappear at least for the simple-living, simple loving Kashmiris. The people of Kashmir are very excited to witness top division Football for the first time. So apart from creating history, the other important achievement for Real Kashmir is uniting the people of the state. And definitely that will bring some peace and harmony on the ‘Earth’s Paradise’.

Previous Following the overwhelming performance at the Asian Games, India record the best-ever performance at Para Asian Games too
Next In teens they won Asian Games medals- Radha Venkatesh and Rashitha Raju are India’s pride; only that they are para athletes