Once a rookie, now the flagbearer; the 100th match mark speaks volumes about talisman Sunil Chhetri

India’s campaign in the Intercontinental Cup 2018 is definitely important for the Senior Team’s preparation for the 2019 AFC Asian Cup. But during this period of 1st – 10th June there is a significant occasion that is very rare in Indian Football. Sunil Chheteri- the man, the master and the propagandist of present-day Indian Football- is set to play his 100th international match for India. 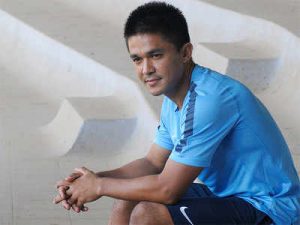 As Sunil Chhetri will lead the team against Kenya in their second game of the Intercontinental Cup at the Mumbai Football Arena on 4th June 2018, he will become only the second Indian player to reach the 100-game mark. His mentor Bhaichung Bhutia is the only man ahead of him with 104 matches for India and if everything goes well, Chhetri will eclipse Bhutia in terms of representing India on international fronts.

“I had a dream but never dreamt of playing 100 International matches. This is unbelievable. Honestly, I never think much about milestones. It was only when I was having a chat with my mom the other night that she became a bit emotional. How big it was for her made me realise how big the occasion is.”

Chhetri who began his domestic career with Kolkata giants Mohun Bagan in 2002 always had an eye for goal. His first international match was for the U-20 squad playing against U-13 Pakistan side in 2004 SAF Games. Though he did not score but was part of the winning side. His first goal for India came four days later against Bhutan when he scored twice in their 4-1 victory. 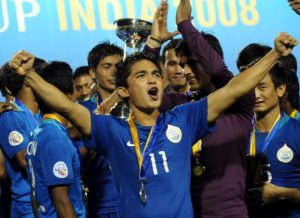 However, playing for the senior team was always his priority and he debuted there with a bang in 2005. Chhetri still remembers that friendly occasion against Pakistan.

“We were in Pakistan and Nabi-da (Syed Rahim Nabi) and me were the rookies. We were kind of chilling knowing that we may not be fielded. But Sukhi-sir (Sukhwinder Singh) made both of us start the game. I scored a goal and all in euphoria I ran to the Pakistani fans and started to celebrate.”

The 2007 Nehru Cup was Chhetri’s first international tournament where he was in great touch to score five goals and help India become the first champions of the tournament since 1997. Being a talented youngster then, Chhetri matured himself to become the anchor of Indian Football.

“Once you grow older and you play more, you understand what’s not good for you rather than what works for you. As you grow older you tend to start filtering stuff which is not needed and which is not important for you. That’s what is learnt. So I do the things which work for me. It’s monotonous but I hope it continues.” 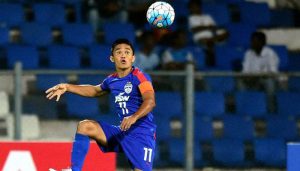 Sunil Chhetri is the leading goalscorer for India and also ranks third in the list of present-day top international goalscorers. He lies behind Cristiano Ronaldo and Lionel Messi and is joint third with his hero, David Villa with 59 goals. But though being the flagbearer of Indian team, he does not want to remain the only Chhetri in his team.

“We need better players than Chhetris instead of just Chhetri, because Chhetri has reached only 100. All the kids, who are good and want to play need to get better facilities, diet, coaching facilities and places to play. Are we tapping all the potential right now? No. The day we do that, then we can say that the best are out there. At the moment, we are not doing that.”

Thus, at the moment, India need more international exposure. We have been playing better and have come up in FIFA ranking. But the road ahead is quite long and stretched.

“When we played South Korea, Australia and Bahrain at the Asian Cup, we stared with our mouths agape. These friendlies against Australia and Japan should be normal. We should be rubbing shoulders with the best of Asia.” 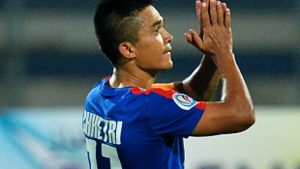 As the talisman striker will take on the field against Kenya, there is little celebration to happen. Indian coach Stephene Constantine does not want much celebration in the midst of a tournament. But still All India Football Federation (AIFF) has planned to present Chhetri with a plaque ahead of the match. The Mumbai Football Association (MFA), too, has planned something interactive to give fans the opportunity to wish Chhetri.

“I need to thank my parents, friends, family, all my coaches, players, fans, media for their support in my journey in being able to be the second person in history play 100 International matches for my country. It feels special. I just feel I will be able to keep my emotions under control, play the game as we should, stick to the plan and try to win the game for the country.”

Previous He showed the way to celebrate; Roger Milla was the man of Italia 1990
Next India win comprehensively against Thailand in the second match of Women’s Asia Cup