“The Young Player category resulted in some of the most diverse nominations, over a dozen names being put forward from more than 10 different countries. All of our nominees made a major impact on the game having started their careers at clubs or schools but only one began after forming her own team…….”

This is what Scrumqueens- the online home of Women’s Rugby- wrote about their Young Player Award recipient of 2019. 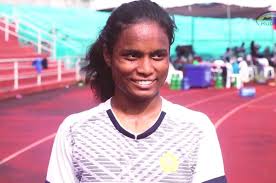 Sweety Kumari started Rugby at 14 and almost single-handedly organised a team to enter into the state championship. Within three years she was in the national U-17 team and in 2019 she was selected for the senior national team.

Scrumqueens further wrote, “She impressed from the start but it was this year that she started making a big impact scene in Asia at both sevens and fifteens……………….her explosive pace and power has resulted in her top scoring at most of India’s Sevens tournaments, as well as scoring two outstanding tries in their first ever test match win against Singapore.”

Sweety’s speed has made her one of the most sought-after player in the Rugby world. The opponents put on three defenders to cover her but fail to match her speed. Thus she has earned the nickname of ‘Scoring Machine’ from her team mates. 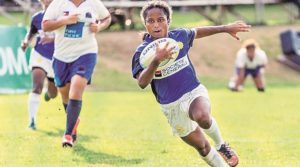 Sweety has been playing Rugby for only 5 years but she has set an example in her village. Her father who works as a handyman is proud of her daughter and puts her ahead of his other children including his sons. In her village she is treated with extra care and concern.

Awards and accolades are coming from far-off places but what lags is national recognition. It is unfortunate that Sweety plays such a sport in India that requires a long way to go. So Scrumqueens summed up aptly, “India’s hopes of playing outside Asia appear limited with at least half a dozen better resourced and more experienced nations competing for Asia’s one or two spots in world tournaments….. so we may be a long time before we see Kumari pit her speed against the likes of Portia Woodman or Ellia Green, but if any one player can take her team to a higher level its Kumari.”

Previous “Pickleball refreshes the mind, relieves any pent up emotions and help in developing a fresh outlook…….”
Next After Esow Alben its Ronaldo Singh, Indian juniors cyclists claiming no. 1 spot to make their mark in world Cycling