UPDATES
Home / EXCLUSIVES / ACHIEVERS / To him ‘the mind is without fear’; triple amputee Tinkesh Kaushik breaks all barriers

To him ‘the mind is without fear’; triple amputee Tinkesh Kaushik breaks all barriers

Tinkesh Kaushik was just 9 years old when he got electrocuted. The accident took away both his legs from below the knee and his left arm. But Tinkesh never let his capabilities be limited by his disabilities or pessimistic thoughts.

He belongs to an Indian state that has never fallen short of producing the best sporting talents in the country. It is also a state where competition is the law of the jungle; where there is no place for the weaks. Tinkesh Kaushik is the product of Jhajjar in Haryana district. The toughness of this place has probably moulded his body and soul. 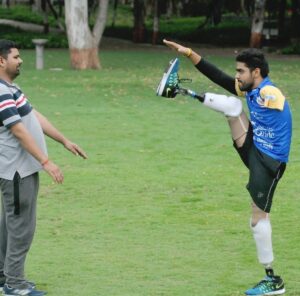 Tinkesh Kaushik was barely 9 when he was electrocuted while flying kite. The shock made him an amputee and took away both his legs from below the knee and the left arm above the elbow. But a major blow at such a tender age did not stop Tinkesh from breaking the barriers and defeating the odds. In an interview conducted by Sportsavour, Tinkesh said that he had full support from his family who took great care of him even though people around them were not supportive at all.

“It was never a case of being sad or depressed for me. After 3 months in hospital, I came back home. And at that age I found various alternatives in leading my life like walking on my knees or my hips with support. I was always motivated to lead a normal life.”

After completing his graduation in 2015, Tinkesh realized that he had to shed some extra kilos. So he started running and felt a desire to pursue other sports too. With Jaipur Footprints he started to participate in small-distance marathons.

“I ran my first 2 kilometres marathon on Gandhi Jayanti in New Delhi from India Gate to Jama Masjid. I uploaded that video on social media and requested for prosthesis.” 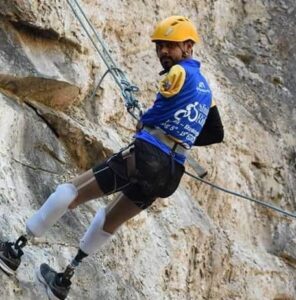 The video went viral that acted as a breakthrough event in Tinkesh’s life. Hyderabad-based organization, Aditya Mehta Foundation, promised to donate his prosthetic legs. Tinkesh moved from Jhajjar to Hyderabad.

“My goal was always to represent India in the Paralympics but due to certain factors, it just did not happen. I had to quit Para-Cycling professionally because it costs much. But I still run marathons because of my passion”

Tinkesh holds the record for being the first Asian triple amputee to perform a Bunjee Jump from the Canyon Swing Site in Nepal after jumping from a height of 160 meters.

“For events like jumping, you need to be fit, definitely not overweight; there should not be any medical issue.I t was a tough time convincing people to let a physically challenged person perform the jump.” 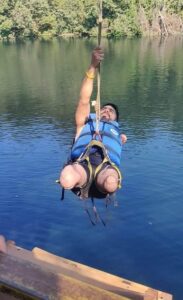 After the jump, it was not only that Tinkesh was satisfied but the entire support unit were immensely proud.

“Being the only Asian to perform that jump is something I am really proud of. There is no training, just the fear that you have to overcome. If you take the decision that you can complete a task then there is nobody in this planet who can stop you.”

Currently, Tinkesh works as a fitness trainer in Pune. He takes session both for the able and differently-able person.

“Of course people doubt when they look at me, but it only takes a single session for me to erase all their doubts. My only message for people is to be mentally strong;, that is your greatest strength. People say that disability is a hurdle, I don’t think so. Everyone has their own share of difficulties in life. It is the mindset that limits how quickly and effectively one can overcome those. If I can do it, why can’t you?”

Previous The voice that brought life to cricket- Kishore Bhimani and his flawless articles will forever be remembered
Next Does immune system respond to exercise? The answer lies deep as the Covid threat still lurks