Vijender to compete in his next bout in August 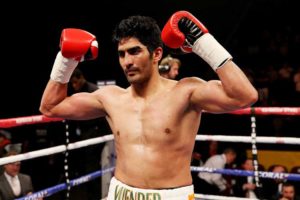 India’s professional boxer Vijender Singh ‘s next bout against Chinese boxer Zulpikar Maimaitiali is going to be held in the first week of August. The World Boxing Organisation (WBO) has sanctioned the bout and will soon announce the date. Earlier this year Zulpikar backed out of the April 1 contest against Vijender without specifying any reasons. The Vijender-Zulpikar super middleweight contest is to be a double Asian title fight. The Indian’s WBO Asia-Pacific belt and the Chinese boxer’s WBO Oriental title were to be on the line in a winner-takes-all bout.