Mahendra Agarwal is the Founder Director of India Squash Professional (ISP), a non-profit making sports NGO in India. A businessman by profession, Mr Agarwal’s sheer love for the game of squash had led him to the foundation of this organization. ISP has been working relentlessly in this field for the last 25 years to promote squash in India. In a candid chat with us Mahendra Agarwal shares his experience about squash in India.

I started playing squash from 1988. It was the time when there were fewer players who took the game professionally. I used to play with professional players and they complained about the deficient condition of this sport in India. Moreover there were markers who were not properly paid. As I was very enthusiastic about this sport and loved playing it, I wanted to give back something. So I started ISP to promote squash in India.

The game got its popularity and more youngsters have joined the game as professionals. So ISP has succeeded in making people believe that they can opt squash as a career and earn money. Till date this is our greatest achievement that we had made people aware.

I will say yes, because today a professional squash player in Maharashtra can earn 30,000-40,000 rupees a month. A standard squash player can earn a scholarship and go to universities abroad as foreign universities are working to bring more people in squash and popularize the game. From Mumbai, every year 2-3 young players go abroad on scholarships. So if a talented player from a middle-class family decides to take up squash professionally then it’s a safe career for him as he can start from 40,000 rupees and reach till 5 lakhs.

Formerly, when we played, squash courts were only confined to sports clubs. But now there are some 100 independent courts available in and around Mumbai. 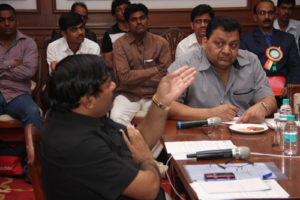 Previously, there were very few tournaments organized in Maharashtra but now there is at least one tournament every month. ISP has worked in organizing more and more tournaments and we are supported by SRAM. Not only ISP but other sports clubs are doing their best to promote squash.

In Maharashtra, like ISP, some other organizations are working to make the game popular. Other states are also doing their part. But the main problem is that we do not get sponsors easily for this sport. The reason is that common people don’t get to see much of this game in television. There are very few matches broadcasted in television and without people’s viewership, sponsors cannot be attracted. The problem is not only in India but throughout the countries where this game is played. We are all working and let’s hope for the best.