Competing in the Junior 15km Elimination Final held at Ibaguein Colombia, Anand Velkumar came in with a final time of 24.14.845 seconds, which was good enough to take home the coveted silver medal.

Aditi Ashok narrowly missing out on a bronze medal at the Olympics after finishing fourth, Kamalpreet Kaur becoming the first Indian woman to breach the 65m mark in Discus Throw, and obviously Neeraj Chopra’s historical Olympic Gold at the Tokyo Olympics, India is definitely branching out when it comes to putting in good performances in sports. The latest of such great achievements comes in the form of young Anand Velkumar from the Inline World Speed Skating Championships. The Tamil Nadu lad showcased a thick vein of form as he went on to bag the silver medal at the aforementioned tournament. With this medal, he became the very first Indian to clinch a medal at any Inline Speed Skating World Championship. 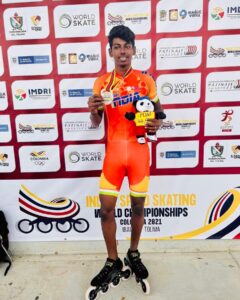 It is undoubtedly a historic landmark for India in the world of sports. The event was mostly dominated by the skaters Miguel Fonseca, and Marco Lira, from Columbia, and Portugal, respectively. However, Anand Velkumar ensured that no one would be able to forget him. The talented skater stood out thanks to his impressive skills on the roller skates. As he reflected on his victory, he relayed in a statement from the Colombian Skating Federation, “I was just thinking; we are going to cross the finish line, don’t fall, because it was really difficult in the rain“.

Owing to this silver medal win, Anand Velkumar has now also qualified for the World Games that are going to be held in America. Speed Skating will also be a part of the 19th Asian Games 2022. In fact Velkumar was not the only Indian fighting in the Championship. The other shining stars from India were Dhanush Babu, who was placed 6th, Gurkeerat Singh and Siddhant Kamble in 8th place, and Aarthy Kasturi Raj, who booked the 10th position in the championship. All four of them have qualified for their next event as well.

Thanks to Velkumar, the world will now have to look up and take India into account when it comes to Inline Speed Skating, as it is by no means easy to bag a silver medal at this stage of the World Championships. Hopefully this victory will inspire more and more Indians to take up roller sports and thereby go on to create a very bright and exciting future ahead for India.