Pritam Rani Siwach, one of the ten Dronacharya awardees this year, is dedicating her life to make lives better of multiple young talents of Indian Hockey.

It has been a period of 17 years since Pritam Rani Siwach was conferred the Arjuna Award in 1998. She was then in the prime of her playing career, being one of the best forwards ever to grace Indian Hockey. Presently, Siwach works around the clock to make the lives of the girls in her academy just a little bit better at Sonepat in Haryana. 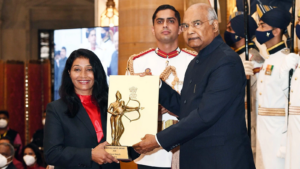 The former Indian captain was one of the ten recipients of the Dronacharya Award this year. As a result, she joins the elite list of the few people who have been able to win the National Sports Award both as a player and as a coach. The Dronacharya Award is presented to coaches for carrying out outstanding and meritorious work on a consistent basis, which allows athletes to excel at the national and international stages. Siwach has always been a champion who guides young girls out of the shackles of poverty, by using Hockey as a tool.

As the Indian Women’s Hockey Team battled it out against Great Britain in the bronze medal playoff at the Tokyo Olympics, Siwach was going through a rollercoaster of emotions. She had spotted Team India mainstays like Neha Goyal, Nisha Warsi, and Sharmila, and many other players, and then trained them at her Hockey Academy.

In 2004, while entering the twilight of her playing career, Siwach came across a plot of land in Sonepat, which seemed big enough to train players. Having been one of the most talented players India has has ever seen, with incredible leadership qualities and experience of the game, it seemed logical for her to take up coaching. 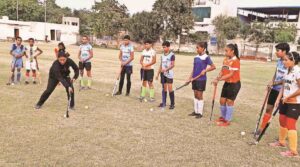 From an empty grazing land, that field has now turned into an institution churning out some of the most talented players in the nation, including a few who are presently representing India. Unlike many before her, Siwach’s main focus was working at the grassroot level. She started with the thought that those girls from rural areas would not face the same difficulties she had gone through.

She chose girls who came from such poor families where the fight was for two proper meals a day. She had to cajole and give them repeated assurances of taking complete care of their expenses for training and diet. In the beginning, Siwach and her husband Kuldeep started to train in a humble way. But as the years started to roll, their girls started doing well at the national level and a few even got selected for the Indian team. That was when they finally had a washroom and a small gymnasium added close to the ground. Several of the girls who train under Siwach, reside in the nearby hostels.

It was here that Goyal, Warsi and Sharmila had their first Hockey lessons. The trio had had a difficult childhood. Thankfully, for them, they were provided a huge amount of support by Siwach and her academy. In fact, Warsi had even quit Hockey once, with her family going through a severe financial crunch. It was at this time Siwach approached her family, and after a lot of persuasion, managed to convince them to allow Warsi to return to training.

Despite an extremely tough start, the success that the girls of her academy achieved, changed the minds of their parents and now many of them have ended up doing odd jobs at the academy itself. At present, there are in excess of 200 girls in the academy, and after the strong performance by the Indian Eves at the Tokyo Olympics, many other girls want to join the academy as well. 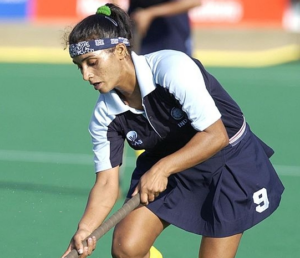 The 47-year-old Siwach got married very early at 23. She gave birth to her first child at 26. In the year 2004, Siwach took her ‘first retirement’ as a player. She understood that it was the right time to give back to the sport that had given her recognition. Her husband Kuldeep insisted that Siwach acquire a coaching diploma from the National Institute of Sport, Patiala.

The following year, Siwach’s work at her academy continued, as she made a comeback into the national team. With the help of a few of her trainees, she raised funds, to build changing rooms and toilets. She even requested the people in the village to sponsor a water cooler, erect a fence around the training ground with the help of local authorities. Her Herculean efforts transformed the area into ‘something that would pass off as a hockey ground’.

After taking her final retirement as a player in 2008, Siwach shifted all her focus towards coaching full-time. Presently her academy is a haven for all underprivileged players hailing from the region. Besides training, the young athletes also receive a playing kit, nutrition, and in some cases, even shelter, thanks to the dedicated effort of Pritam Rani Siwach.

Previous Anand Velkumar- The first Indian to win a medal in Speed Skating World Championship
Next Portugal in a tricky situation; Ronaldo may not even get to play in Qatar World Cup