R Praggnanandhaa became only the third Indian grandmaster to win against Magnus Carlsen after Vishwanathan Anand and Pentala Harikrishna.

Norwegian World No 1 Chess player,Magnus Carlsen, was left in a shock when 16-year old Indian boy Praggnanandhaa beat him at the Airthings Masters Online Rapid Chess Tournament. The young talent completed his achievement in only 39 moves.

Praggnanandhaa currently sits 12th with eight points after eight rounds and a battle ahead to reach the knockout stage of the Airthings Masters. The quarter-finals will be held on February 23 while the semi-finals and final will be played from February 24 to 26.

Just after the incredible win, Praggnanandhaa covered his mouth with his hands, while Carlsen immediately logged off after his defeat. Later when Praggnanandhaa was asked about his celebration, he just replied, “I think it’s about just going to bed.” 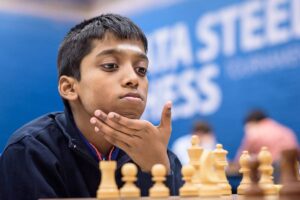 Sachin Tendulkar congratulated Praggnanandhaa in his tweet, “What a wonderful feeling it must be for Pragg. All of 16, and to have beaten the experienced & decorated Magnus Carlsen, and that too while playing black, is magical! Best wishes on a long & successful chess career ahead. You’ve made India proud.”

Previous Goodbye Beijing; now its turn for Milano Cortina in 2026
Next Russia’s invasion of Ukraine affects sports events; athletes protest against the attack