UPDATES
Home / TRENDING / LATEST / COVID disrupts sports yet again; Khelo India Youth Games is the latest to be postponed for the surge

Panchkula, Ambala, Chandigarh, Shahabad, and Delhi, were the 5 cities where The Khelo India Youth Games were to be held.

Haryana, the hosts of this fourth edition of the Khelo India Youth Games, had actually been the winners of the first edition of the Youth Games, back in 2018. The Games were slated to kick off from the 5th February and then continue to the 14th of February.

It has been announced that a proper review of the COVID-19 situation in the country will be conducted, before the new dates of the Youth Games are decided upon. The dates will only be finalized after a thorough consultation with the stakeholders.

The plan was that 25 sporting events would be a part of the Championships. This list of 25, which were also to be held in the Under-18 age groups, would have included five traditional indigenous sports, namely, Gatka, Kalaripayattu, Thang-ta, Mallakhamba and Yogasana.

Previously, I-League was suspended for at least six weeks after COVID-19 breached its bio-bubble. Only six matches of the I-League season have been played on December 26 and 27 before it was suspended. Similarly, the Board of Control for Cricket in India (BCCI) announced the postponement of the Ranji Trophy, Col C K Nayudu Trophy & Senior Women’s T20 League on Jan 4. 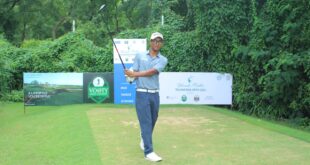 For Kartik Sharma, the transition from Tennis to Golf paid off

Ever since he made the transition from Tennis to Golf at 11, Kartik Sharma’s journey …