Saikhom Mirabai Chanu has made history, bagging India’s first medal on Day 1 at the 2020 Tokyo Olympic Games. She won the silver medal in 49 kg category of Weightlifting.

Mirabai Chanu was on a mission to redeem herself from her rather forgettable outing at the 2016 Rio Games where there was not even a single legitimate lift logged by her. So this year, the 26-year-old hailing from Manipur was determined, she amassed a combined 202kg (87 kg + 115 kg) in Tokyo 2020. 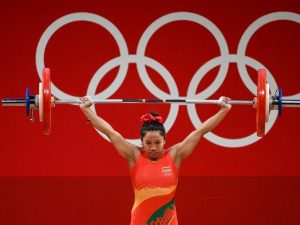 Chanu’s feat ends a 21-year-long wait for India in Weightlifting at the Olympics. The last time India won an Olympic Medal in Weightlifting, was when Karnam Malleswari lifted the bronze medal in the 69 kg category, at the 2000 Sydney Olympics.

At her home friends, family and neighbours had all gathered to follow Chanu’s campaign on the big stage. In the words of an elated Saikhom Tombi Devi, Chanu’s mother, “We are mostly vegetarian, but tonight will be an exception. We are very happy and proud for her and we hope the country is proud of her,“.

This incredible feat has attracted praise from all corners of the country on different social media platforms, especially Twitter.

Both the Prime Minister, Narendra Modi, and the President, Ramnath Kovind, have posted congratulatory ‘tweets’ from for the medal-winner after her win.

“Heartiest congratulations to Mirabai Chanu for starting the medal tally for India in the Tokyo Olympics 2020 by winning silver medal in Weightlifting“. 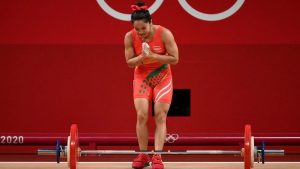 The Prime Minister’s tweet reads, “Could not have asked for a happier start to Tokyo2020! India is elated by Mirabai Chanu’s stupendous performance. Congratulations to her for winning the Silver medal in weightlifting. Her success motivates every Indian.”

Meanwhile, in Tokyo, Mirabai Chanu had a talk with the reporters at the Mixed Zone after her win.

“I am very happy that I have won the medal. The entire country was watching me and they had their expectations, I was a little nervous but I was determined to give my best. In 2016, I did not have a good show but it proved as a learning curve for me and I got to know where I need to improve. I worked really hard for this.”

Chanu has not visited her home since she started preparing for the Olympics. So she wants to head straight to Manipur after returning to India.

“It has been 1-2 years that I have not gone home and spent some time with my family. There is no plan as such, but I’ll party today.”