The Olympic motto now has the word ‘Together’ added after ‘Faster, Higher, Stronger’ in response to the COVID-19 crisis.

‘Citius, Altius, Fortius’,- the original motto of the Olympics was adopted by the founder of the modern Games Pierre De Coubertin in 1894 as he wanted a slogan that expressed excellence in sport. 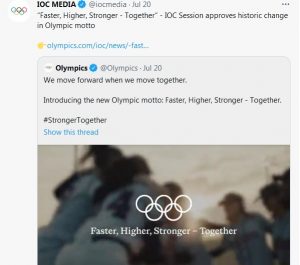