UPDATES
Home / TRENDING / LATEST / Day 10 Glory: On a historic day for Indian Hockey, the Indian Women’s Team reached the semi-finals of the Olympics

Day 10 Glory: On a historic day for Indian Hockey, the Indian Women’s Team reached the semi-finals of the Olympics

History was created at the Oi Hockey Stadium — North Pitch – after the Indian Women’s Hockey Team recorded a 1-0 win over Australia in the quarter finals of the ongoing Tokyo Olympics.

Three-time Olympic champion, Australia, seemed to be the favourite to win the match on paper. But the Indian women’s team put in a gritty performance and kept Australia at bay. This is the first time in history that the Indian Women’s Hockey Team has reached the semi-final stage at the Olympics. 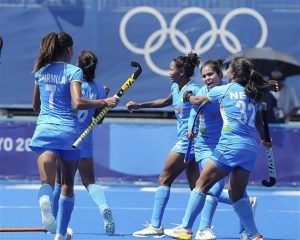 This is the third win for the eves at the Tokyo Olympics, after they beat Ireland and South Africa, 1-0, & 4-3 respectively. The team made a huge turnaround after having lost all of their opening three ties, Netherlands (1-5), Germany (0-2), and Great Britain (1-4). They ended up finishing fourth in Pool A at Tokyo, in what is only their third Olympic campaign.

Despite going up against the World No. 2 ranked Australian side, the Indians Eves ranked World No. 9 seemed really determined to achieve a victory, right from the word go. Australia, who had topped pool B, seemed to be unable to break down India’s well-organised defence. India looked the more dominant side, having recorded a possession percentage of 59 in the 1st quarter of the match. The Eves continued their good form in the second quarter as well. Despite India having notched up just 5 shots on goal throughout the match, compared to the 14 of the Pool B table-toppers, India were efficient enough to convert the only penalty corner that came their way. Drag-flicker Gurjit Kaur, stunned the ‘Hockeyroos’ by converting that lone penalty corner, in the 22nd minute.

However, after getting their goal, the Rani Rampal-led side made sure that they did not lose their goal-advantage cheaply. India foiled 8 penalty corner attempts made by Australia and acquired a well-deserved victory.

The previous best Olympic outing for the Indian Eves came way back at the Moscow Olympics in 1980, where they stood 4th, out of a total of 6 teams. Women’s Hockey had just made its debut in the Olympics, in that particular edition of the Games. There was a round-robin format where only the top two teams would qualify for the final. 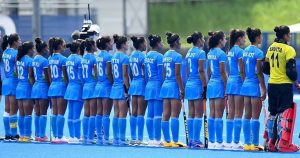 This is what goal-scorer Gurjit Kaur had to say after the match,

“Very happy with the win, everybody worked very hard for this win. We performed like one team and we are feeling so happy to have qualified for the semifinals. Thank you to all those who supported the Indian women’s team,”

“This team is like a family, including the coaching staff. Our entire country supports us and everybody’s prayers are with us.“

Previous Tokyo Moment: Marcel Jacobs is Usain Bolt’s heir to 100m; becomes the first Italian to be the fastest man on Earth
Next Tokyo Moment: Xander Schauffele won the gold where Golf emerged the ‘winner’