From landing a job as a junior ticket collector to leading the Indian Women’s Hockey team in the Rio 2016 Olympics and now travelling to the Tokyo Olympics as an experienced and crucial member of the squad, it’s been a long journey for Pukhrambam Sushila Chanu.

In 2016 Rio Olympic Games, the Indian Women’s Hockey Team was qualified to play in the Games after 36 years. It was indeed a proud moment for Sushila Chanu who was selected the captain of the team. “I am really happy but I am little tensed as well because it is a big responsibility to lead the side in the Olympics after 36 years, but I have been a captain at the junior level and have got a lot of support. I am getting a lot of support here as well,” Chanu reacted after her appointment.

However, the Indian eves had a forgettable disastrous outing, getting knocked out in the group stages, with 4 losses and 1 draw. They scored just three goals, two of which came in the draw against Japan and conceded a mammoth 19 goals.

But this time it’s a different story altogether. The squad has gone through rigorous practice to prepare for the Olympics and now has the perfect balance of 8 seniors who were members of the team that played at the 2016 Rio Olympics, and 8 new young players. The team will be led by the very talented Rani Rampal. As a senior member of the team, Chanu, who is now 29-years old, feels that the perfect harmony of experienced heads and young blood is what will make this Indian team successful. 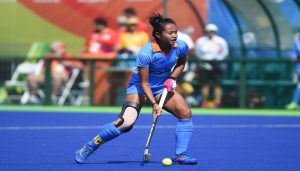 Sushila Chanu is now an experienced member of the Indian Hockey team but not before she experienced the ebb and flow of the journey. Chanu, born on the 25th of February 1992, hails from Imphal in Manipur famous for giving birth to the Boxing legend Mary Kom. Chanu idolised Kom for her grit and power and always wanted to be the best in her field like her idol.

Sushila Chanu’s family was always enthusiastic about sports and she really fell in love with the idea of becoming an athlete when she witnessed a National Games Football match back in 1999. Chanu kept nurturing the idea and when she was 11, at the suggestion of her family members, primarily her uncle, she first decided to try her hands at Hockey. She became a member of the Posterior Hockey Academy in Manipur. After continuing there for 4 years, she shifted to Madhya Pradesh Women Hockey Academy located in Gwalior to further sharpen her skills.

After that shift in 2007, Sushila Chanu has never had to look back. The following year, in 2008, Chanu made her junior international debut in the Indian colours, at the U-21 Asia Cup held in Malaysia. Her talent was soon visible to everyone as she played brilliantly and was one of the reasons for two consecutive bronze medals that the junior Indian Women’s Hockey Squad won, at the Four-Nations Hockey Championship, both in 2011 and in 2012.

Chanu made her senior international debut in a Test series against New Zealand in Christchurch back in 2009 when she was just 17. The highly-rated halfback would also go on to lift the silver medal at the 6th edition of the Junior Women Asia Cup held in Thailand. She had risen through the ranks quickly to become the captain of the Junior side and her greatest moment as a junior came when the halfback led her team to a bronze medal finish at the 2013 Junior World Cup at Mönchengladbach in Germany. 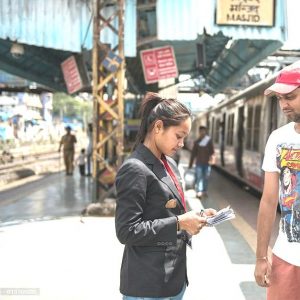 In 2009 Chanu had to stay away from the sport owing to fitness issues. It was at the same time that she graduated from her course at the Madhya Pradesh Women Hockey Academy. Once she completed it, Chanu joined the Central Railways, as a Junior Ticket Collector posted in Mumbai.

Chanu had impressed everyone with the talent and leadership qualities she displayed at the 2013 Junior World Cup and she became a mainstay in the senior team since then. She was a member of the senior squad that lifted the gold medal at the 2013 FIH World League, which was held in New Delhi that year. Since then she has donned the Indian jersey at both the eighth and ninth editions of the Women’s Asia Cup, held in 2013 and 2017 respectively. India lifted the gold medal in the latter edition. India also won the bronze medal at the 17th Asian Games with Chanu as a major crux of the Hockey squad. She played her heart out to help India reach one of the Semi-final berths at the 2015 Hockey World League. She has also been a part of the India squad for two consecutive editions of the Commonwealth Games – 2014 and 2018.

Everything seemed to be running smoothly for Sushila Chanu until disaster struck at the beginning of 2016. She sustained a severe injury in her Anterior Cruciate Ligament (ACL). The severity of it was such that she almost had to undergo reconstruction surgery. However, the resilient halfback devoted all her time and attention to getting back to match fitness as soon as possible. A strict exercise and physiotherapy regimen helped her to regain her strength and she was ready to be selected for competition in an, incredibly impressive, eight weeks. 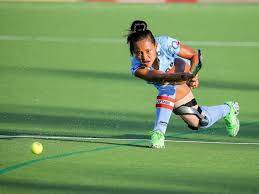 With 4 goals and more than 180 caps to her name, Chanu is truly a veteran now. Regarded as one of the most technically sound players ever to grace Indian Hockey, Chanu completed the incredible milestone of 150 international caps for the country back in 2018, when India took on Spain in a 5-match series. Chanu got her 150th cap in the second match of her tour. Chanu proudly announced, “I had always dreamed of representing the country at least once in my lifetime, but to have put on the national team colours 150 times, it makes me a very proud citizen of the country. It’s been a memorable journey with the Indian team and I hope I can contribute to the growth of the team and bring laurels to the nation in the future”.

Despite being well on the way to represent India at the Olympics for a second time now, Chanu still has to ensure that she does not lose her job as a ticket collector. According to her, unlike M. S. Dhoni who incidentally was also a ticket collector himself before becoming a cricketing superstar, all athletes cannot leave their jobs and just pursue sports. She is a bit saddened by this state of sports in India but the warrior that she is, she is never going to stop fighting to earn what is hers. Hopefully, she will continue to play at her incredibly high level and bring India success for years to come.

Previous ‘Babe’ Didrikson Zaharias: an extraordinary Track and Field Olympian who excelled in Golf and was proficient in a handful of other sports as well
Next An amended Olympic motto; IOC adds ‘Together’ after ‘Faster, Higher, Stronger’