On a historic day for Indian sports,  Manika Batra battled her way into the 3rd round of the Tokyo Olympics. This achievement makes her the first-ever Indian paddler, to reach the last 32 at any edition of the Olympic Games.

Manika Batra’s grit and determination were clearly on display, as the World No. 62 pulled off a breathtaking comeback in her match against Margaryta Pesotska from Ukraine, who has a world rank of 32.  Batra could be seen struggling to find her rhythm at the beginning of the tie and went on to lose both of the opening two games of the match, inside 10 minutes. However, she turned the match on its head from the third game and pulled off a thrilling victory. 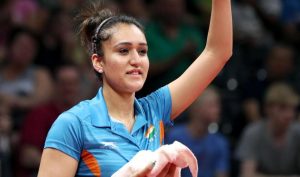 After having lost the first couple of games, Batra seemed to make an alteration in her tactics. She began to play deep into the table, to suffocate her strong adversary and hit numerous forehand winners to good effect. With the match poised at two games to each, she then also started to flip her racquet during points. Batra would go on to snatch a victory from the jaws of defeat, at the end of a 7-game thriller in a little under 60 minutes, with the scorecard reading 11-4, 11-4, 7-11, 10-12, 11-8, 5-11, 7-11.

Having shown the door to the much higher ranked Ukranian, 26-year-old Batra now becomes the first ever Indian Table Tennis player, regardless of gender, to move into the 3rd round of a Table Tennis Singles event at the Olympics.

As she progresses into the 3rd round of the single’s event, the best wishes of every Indian go with her.