18-year-old Ahmed Hafnaoui from Tunisia became only the 5th Tunisian to win an Olympic gold medal, after he beat Australian swimmer Jack McLoughlin in the 400m Swimming Freestyle finals at the Tokyo 2020.

Termed officially as the Republic of Tunisia, the country is the northernmost nation residing in the African continent. This country, consisting of just 11 million people, had its National Olympic Committee created in 1957. Before Tokyo 2020, this country had won 14 medals in total at the Games- 4 gold, 3 silver, and 7 bronze. So guess the jubilation that transpired there when 18-year old Tunisian Ahmed Hafnaoui took the world by storm when he pulled off an almost impossible victory in the men’s 400m Swimming Freestyle finals in Tokyo. 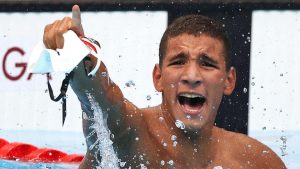 The teenager beat Jack McLoughlin from Australia by a mere 0.16 seconds. Hafnaoui timed 3:43:36 m to win the gold. The bronze medal went to Kieran Smith from the USA.

This performance by Hafnaoui came in stark contrast to only three years back, when he had finished in eighth place, at the 2018 Buenos Aires Youth Olympic Games, in the same event. It was unbelievable for Hafnaoui too as he was targeting an Olympic medal in Paris 2024.

“I just can’t believe it, it’s amazing. I felt better in the water this morning than yesterday and that’s it. I’m the Olympic champion now.”

Hafnaoui had found a place in the finals of the event, after qualifying in eighth place, at the end of the prelims, with a time of 3:48.68. The final race started off with a lightning speed in the first 200m, that registered under world-record pace. However, the times slowed down in the second half of the competition. The youthfulness of Hafnaoui shone through when he seemed to find a hidden reserve of energy during the last 50 metres. With this achievement, he became only the fifth Tunisian, in history, to win a gold medal at any edition of the Olympic Games.

Hafnaoui’s father Mohamed Hafnaoui, was an athlete himself, having been a member of the Tunisian Basketball team, in the past. Young Hafnaoui started Swimming when his father enrolled him in a local club at the age of 6. He has become only the second-ever Tunisian to win an Olympic Swimming gold medal, after his fellow countryman Oussama Mellouli, who had bagged an Olympic gold medal at the 2012 London Olympics, in the 10 km Marathon Swimming event. Mellouli had also taken home the bronze medal at the 2008 Beijing Games, in the 1500m freestyle event.

“He’s a legend. I wish to be like him someday.” 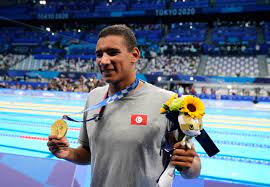 Ahmed Hafnaoui is a proud Tunisian now. He has achieved a near-to-impossible task at this age. He turned completely emotional at the podium as he held aloft the gold medal.

“I dedicate this to all the Tunisian people. You have a champ now. I’m so happy to have a gold medal, just be proud of me, and that’s all. When I see the flag of my country, and I hear the anthem in the background, it was great.”