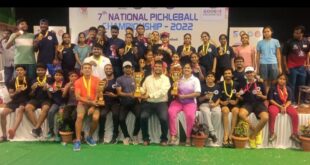 Gokulam Kerala FC becomes the first team to win consecutive I-League titles since its inception in 2007-2008. 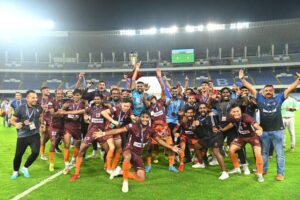 Needing just a draw to retain the title, Gokulam Kerala FC beat home favourite Mohammedan Sporting 2-1 in front of 47,000 supporters at the Salt Lake Stadium on the last day of the I-League 2021-22 season.

Rishad and Emil Benny scored for Gokulam Kerala FC, while  Marcus Joseph netted the only goal for Mohammedan FC. All the goals came in the second half, in the span of eleven minutes. Gokulam finished 43 points from 18 matches.

The winners got a prize sum of Rs 1 crore, while the first runner up got a sum of Rs 60 lakhs. Marcus Joseph was awarded the Golden Ball (Hero of the League) as well as the Golden Boot (highest goalscorer) with 16 goals to his name this season.