Sumit Dahiya won gold while Amit Krishan and Virendra Singh won bronze to take India’s medal tally to 16 on the penultimate day of the 24th Deaflympics. 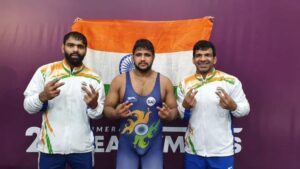 A brilliant performance by Sumit Dahiya won him the only gold medal for India in Wrestling in the 24th Deaflympics. Sumit defeated M P Ghama in the final of Men’s Freestyle 97 kg. With his win, Sumit became the second athlete from India to clinch a Deaflympics gold in Wrestling after Virendra Singh who won it in 2005, 2013 and 2017.

In this edition, the veteran Virendra Singh, famously known as Goonga Pahalwan in Freestyle 74kg after defeating N Barron. This was Virendra’s 5th consecutive medal in Deaflympics. The other bronze medal for India was won by Amit Krishan who defeated S Gozel in Men’s Freestyle 86kg.

India now has a tally of 16 medals that includes eight gold, one silver and seven bronze.