He rose and fell, but he remains; its The Tiger Effect

On the early hours of 29th May 2017, Florida police found a damaged Mercedes Benz standing across the right lane of a roadway with a man in the driver’s seat fast asleep at the wheels. Police found the man to be Tiger Woods, the Golf great, who was unaware of where he was when awakened by the patrolling officers. Tiger was arrested immediately under the charge of Driving Under the Influence (DUI). As per records, his speech was ‘extremely slow and slurred’ after the arrest. Later, Palm Beach Country Jail released him when he asked for forgiveness and promised to cooperate with law enforcement but not before releasing a mugshot showing him tired and unshaven.

A flashback to the 1997 Masters Tournament held at Augusta, Georgia. The 20-year golf sensation Tiger Woods, who turned professional just a year ago, struggled on his first nine holes of the first round. In the next rounds, Woods scored the best rounds of each day and eventually won the tournament twelve strokes ahead of runner-up Tom Kite. His record of the margin of victory and four-day score of 270 (−18) are still unbroken. It was the start of an amazing golf career of the legendary Tiger Woods who has won 79 professional events and 14 major championships. Tiger remained the top-ranked golf player from August 1999 to September 2004 and again from June 2005 to October 2010, an unprecedented 683 weeks. Woods has a record of winning the PGA Player of the Year for 11 times. He has also the record of being the highest paid golfer in ten different seasons. 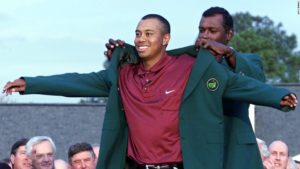 The triumphs of Tiger Woods speak volumes about his golfing brilliance. His talent was first recognized by his father Earl Woods at the tender age of 2. Being a Vietnam War veteran, Earl had the privilege of entering the Navy golf course and thus he took his son, Eldrik Tont Woods to play golf there. The little boy was a ‘Tiger’ in the real sense with utmost hunger and supreme eagerness to learn his craft to its fullest. At the age of 3, he shot a 48 over nine holes at the Navy course.  At the age of eight, he won the Junior World Golf Championships in the 9–10 boys’ event, the youngest age group available. Later, he went on to win the Junior World Championships six times, including four consecutive wins from 1988 to 1991.

While attending his High School, Woods became the then youngest-ever U.S. Junior Amateur champion at the age of 15. He won the Championship three years in a row; a unique feat that easily sailed him to the professional ranks. Though an extraordinary player, Woods was not above colour discrimination. Golf was the sport of the whites but he putted all those prejudices when he became the first non-white golfer to claim the Augusta Masters in 1997. He claimed eight of his majors between 1997 and 2002.

With his long drives Woods dominated the world of golf. However, his denial of upgrading his equipment took a toll. A man, who was so dominant in his first 6 professional years, suddenly lost his golden touch. He did not win a major between 2003 and 2004 and even lost his top rank to Vijay Singh. 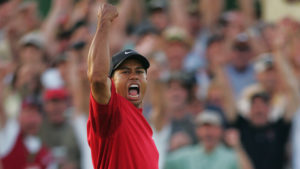 But finally Woods upgraded his driver technology to a larger club head and graphite shaft. This upgradation along with his excellent all-round ability made him dominant in a definitive way. From 2005-2009, Woods won almost everything that came in his way making his competitors insignificant.

Woods dominance clearly stated that he would cement his place as the greatest golfer of all times by overcoming Jack Nicklaus’ record of winning 18 professional majors. But the night of November 27th, 2009 plummeted all his triumphs. A supermarket tabloid ‘National Enquirer’ exposed Tiger’s infidelity that left the world shocked. Reports released accused Tiger Woods of having multiple extra-marital affairs. Adding to this personal crisis, Woods crashed his car into a fire hydrant near his house in Florida just 2 days after his sex scandal broke out. The fall from grace was obvious. Though golf lovers tried to convince themselves by believing Tiger’s innocence, it was their idol’s statement that completely shattered them. Tiger came out some weeks later with a forgiveness message pointing that he would be taking an indefinite leave from golf to mend his family. During that time, Woods went through sex rehabilitation programme and returned to the course 4 months later. But on the personal front he could not restore his relationship with his wife, Elin Nordegren and they got divorced in 2010.

The following years saw the golfer’s deteriorating career, personal frustrations and painful surgeries culminating in his arrest for DUI. 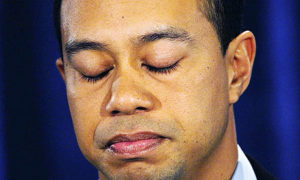 The sex scandal is the line that demarcates Woods astonishing career. Once the most dominating player, Tiger Woods has not won a Major since 2008 or a PGA title since 2013. But as proverb goes -‘love him or hate him, you cannot ignore him.’ The ‘Tiger Effect’ on golf has been immense. Tiger is responsible for the globalization of golf. In the last 10-15 years the European and the Asian circuit have gained relevance. Research reveals that in its 100 years of golf history, America had 14000 golf courses, whereas from 1995 till 2008, the country has added 4000 courses or 307 new courses each year. Young Tiger worshipers cropped up during his hay days of which almost 40% emerged as golf players. He also opened the opportunity of sponsorship in golf. Woods was the most marketable sportsman with endorsement deals with numerous companies. Woods played a significant role in taking the Nike Golf brand to a different level. Viewers thronged before television sets to see Tiger in action. This eventually increased television broadcast of golf.

The invincible Tiger Woods may not be back. But golf needs more laurels from him. It’s very difficult to say that if Tiger ever will be in the perfect state of playing mind. He himself is not quite sure of it when he said, “There’s really nothing I can look forward to, nothing I can build towards. Its literally just day by day and week by week and time by time. Where is the light at the end of the tunnel? I don’t know.” But quite contrary to this it can be said that one win can change the game again because its Tiger’s words only, “Winning Takes Care of Everything.”