Pickleball, the paddle sport, has gone on to become the fastest growing sport in the US. Just ask Mike Johnson, the secretary of the International Federation of Pickleball (IFP ), who says – “It is a game that anyone in the family can enjoy”. A US national, who has been living in Manila, Philippines, for the past 30 years, Johnson has been a part of the Pickleball movement for quite a number of years now.

How did it all begin for you?

Mike Johnson: I used to be a Badminton player and back in 2015, I played every day. A friend of mine had gone to the States and played Pickleball there. She recommended the game to us, here in the Philippines. She sent me a net and some paddles. We found a Basketball court and started hitting the ball around. It was around 2015 when just 3 or 4 of us would play a few times every month. Then we started playing in the streets for about a year. It was a great exposure for us because every passerby could see us play. They would stop and watch our gand we would let anybody, who even looked at us, play. So we were recruiting heavily for around a year. Everybody liked it, everybody enjoyed the game and that’s how we got started – just, literally playing in the street.

How have you seen Pickleball grow since then? 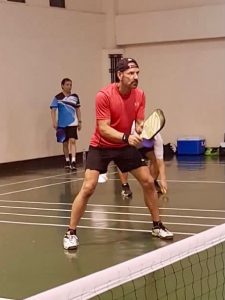 Mike Johnson: It’s grown a lot. We started with around half a dozen people and now we have around 23 organised associations in the Philippines. Our Federation reapplied last July, to the Philippines Olympic Committee for membership. We want to become the NSA (National Sports Authority) for Pickleball in the Philippines. We’re already a full member of the IFP.

How do you attract people towards this sport?

Mike Johnson: We get all kinds of people. We obviously get people who are already engaged in some kind of sport. For example, we get a number of Tennis players. In fact, they really seek out this sport. If we are playing somewhere, and the Tennis players get to know, they will come over and want to join in. The players with us right now, most of them are coaches, so they are really good players. Then they invite their friends, which creates a snowball effect. The Filipinos living abroad, who have been exposed to the sport, also want to play when they come to visit. They come and join and they also invite their friends. So, it is a very social game. I don’t know how to explain it but Pickleball has some very special characteristics.

What are the technical developments that have taken place to modernise Pickleball?

Mike Johnson: I’m on the IFP (International Federation of Pickleball) rules committee. The committee manages the Pickleball rulebook. Every year they take suggestions from the worldwide Pickleball community, on changes, improvements, clarifications, etc. in the rulebook. Every year changes are made to update and improve the rulebook so that it becomes easier to read and understand. It also keeps the sport modern and fresh. This year there are 33 new rules that the IFP rules committee is considering.

In an individual capacity, what are you doing for the growth of the sport? 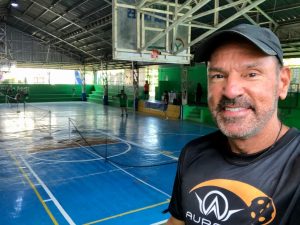 Mike Johnson: Apart from being the IFP secretary, I’m also secretary-general of the Asian Federation of Pickleball (AFP), which we formalised just last year. In the Philippines, I run the Philippines Pickleball Federation. So I lead the charge here in the Philippines to expand the sport, and to take it to new places across the country. In the AFP, I work with other members of the board to organise training programs, clinics, tournaments, etc. Unfortunately, COVID has been around just about as long as the AFP, and that has been very frustrating. We had a host of tournaments planned, throughout the region, and all of them had to be cancelled. However, we still have one tournament that we are working on, and that is the Asian Open Pickleball Tournament, which will be held in Thailand, in January.

What are the substantial developments in the accessories, like the paddles, the ball, etc.?

Mike Johnson: The main thing the IFP is trying to do presently, is developing low-cost paddles, to help drive the sport in 3rd-world countries, and the provinces, countrysides, small towns and cities, etc. of many countries. The technology behind the paddles is pretty straightforward. Plastic, Fibreglass, and Carbon Fibre are the most common materials used in manufacturing paddles. There is also the simple wooden paddle, which is very practical because of its low manufacturing cost. There are some basic rules for the paddle – it cannot be taller than 17 inches, its face cannot be too rough (like sandpaper), and it also cannot have any holes in it. Holes might give the player an undue advantage to spin the ball. But apart from a few rules including those mentioned before, everything is pretty wide open as far as the paddle goes. I guess around 25-30 companies are making Pickleball paddles already, especially with the sport expanding as fast as it is.

Do these companies have some strict guidelines set by the IFP that they must adhere to while making the paddles?

Mike Johnson: You can use anything as a paddle unless you will be participating in a sanctioned tournament. In that case, you need to abide by the equipment standards of the IFP. The guidelines dictate that in such cases your paddle must be approved by USA Pickleball Association (USPA), as well as the IFP. Typically, a manufacturer would make a paddle and send it to a testing facility, for it to be checked. The testing facility makes sure that the paddle meets all of the set requirements. Once it has passed all the testing, USPA will add it to the list of approved paddles on their website. Then the manufacturer can put a label on the paddle, which states that that paddle is approved for use.

How much do you think that the All India Pickleball Association (AIPA), and the IFP, working together, will bear fruit?

Mike Johnson: We support the AIPA’s initiative to spread and promote the sport more in India. We are working together now to develop some low-cost paddles. We need paddles, we need balls, we need nets. The AIPA is trying to organise a big tournament in December and the IFP wants to help organise it with AIPA. I would myself like to join, and if COVID does not pose a huge problem, it can be a big success.

How much are you aware of Pickleball development in INDIA?

Mike Johnson: Sunil Valavalkar has updated me a bit about the history of the sport in India. I hope to learn a lot more and meet a lot more personalities when I visit the country in December. At the IFP we want to help and support the local efforts to grow Pickleball in India. 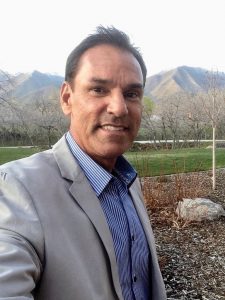 What are your short-term goals?

Johnson had a long chat with Sportsavour and his passion for the sport really shone through. In the end, Johnson had several words of encouragement for any woman who is looking to play Pickleball. He said that there are already a huge population of female players who have already taken to the sport and they are already quite successful. According to him, in Pickleball you do not need strength and power to succeed. You can succeed with technique. Before signing off, Johnson left us with the words, “The game of Pickleball is less physical and more tactical.”

Previous Fresh digital positioning, home-made paddles, substantial tournament ahead- Pickleball India refurbish under coordinated administration of AIPA-APFI
Next Devata Naik aims to contribute towards worldwide development of Dueball in the next 10 years