In this T20 World Cup, Cricket Namibia resurges under their ‘golden generation’ of players

Namibia reached the T20 World Cup second round for the first time when they defeated Ireland by eight wickets. The lowest-ranked team in the tournament is now placed in the same super 12 category as India, Pakistan, New Zealand, Afghanistan and Scotland. 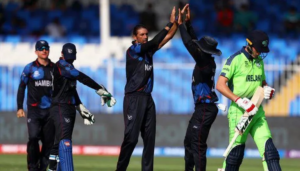 Resurgence, that is the word that can be applied to Namibian cricket. After a long absence of 18-years from the big stage, the Men’s Cricket team of Namibia will face the world’s best, at their maiden ICC T20 World Cup. The last time they had participated in an ICC event was in 2003 at the Cricket World Cup. Since then, there have been a lot of changes in Namibian Cricket with the retirement of veteran players and a few of the newborns of 2003 who have grown up to lift their national side to the international arena once again.

In April 2019, Namibia secured ODI status and booked a spot at the ICC’s Cricket World Cup League 2. Later that same year in October, they qualified for the ICC T20 World Cup then scheduled to be held in 2020. The national Men’s Cricket team secured the fourth qualifying place, out of 6, for the 2020 Men’s T20 World Cup. The 54-run victory over Oman under the floodlights at the Dubai International Cricket Stadium, was their fifth straight triumph in the tournament.

It was a rough start for them at the 2019 ICC T20 World Cup Qualifier, as they lost to both the Netherlands and Papua New Guinea in the group stages. However, the Eagles came back strongly with several players taking centre stage in dire situations. After their first two losses, Namibia claimed victory in an almost do-or-die encounter against Scotland, and then went on to triumph over Bermuda, Kenya, and Singapore. In the playoff stages, they secured the 54-run win over Oman to qualify for the ongoing T20 World Cup. 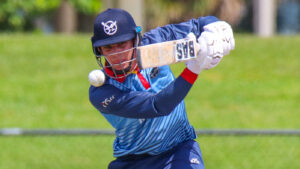 Namibian captain Gerhard Erasmus was just seven years old when Namibia played the World Cup in 2003. Although they went without a single win in 6 matches, their participation in an ICC event acted as an inspiration for the generation that has come through. The current generation of players, considered by many as their ‘golden generation’ hope to fare a lot better in this T20 Cricket World Cup.

“We’re really excited for it now, so imagine the night before,” Erasmus had said after the fixtures for the tournament had been announced.

The team’s recent upturn in performance can be traced back to the alterations that they made to their entire squad at the close of 2018. As they missed out on a spot at the ICC Men’s Cricket World Cup 2019 Qualifier, they immediately appointed former Leicestershire coach Pierre de Bruyn as the national coach. They even roped in former South African cricketer Albie Morkel as Bruyn’s assistant. The whole playing group was issued full-time contracts. 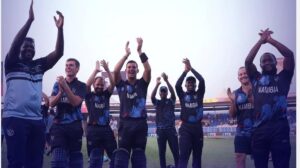 The current bunch of players in Namibian Cricket is exceptionally talented. Erasmus the skipper, leads from the front with the bat. He is ably supported by Craig Williams and Stephen Baard. Then there is the dependable all-rounder JJ Smit. Even their bowling unit is top-notch, especially Jan Frylinck and finger-spinner Bernard Scholtz.

The Namibian team has also been further bolstered by the arrival of former South African international David Wiese, who now competes under the Namibian flag. Wiese has a commendable strike rate of 143.52 across his T20 career. He has taken 24 T20I wickets at an economy of 7.60 in 20 international matches. They also have some exciting youngsters like leg-spinning all-rounder Nicol Loftie-Eaton and 23-year-old Ruben Trumpelmann, their left arm quick bowler. All in all, Namibia have a mixture of explosive batting with a host of tidy bowlers who can pick up wickets. And in Erasmus, they have a strong leader with a wise head on his shoulders, who can lean on his own off-spinning services with the ball, and even provide energy and athleticism on the field in this World Cup.

Previous ‘Messing’ with the ‘Tradition’ of the sport, T20 Cricket takes blistering steps into its 7th World Cup
Next 14-year old Tajamul Islam fights all her way to win World Kickboxing Champion title