‘Messing’ with the ‘Tradition’ of the sport, T20 Cricket takes blistering steps into its 7th World Cup

The curtailed form of Cricket, Twenty20, has changed the whole cricketing landscape. The formula of hitting hard and scoring high has made a lot of the ‘traditional’ Cricket lovers indifferent to this format. However, like its blistering pace, T20 Cricket has reached quickly to its 7th World Cup that is being played at Oman after one-year postponement due to COVID pandemic. 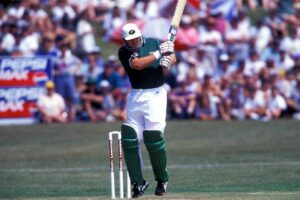 Back in the 1990s, late New Zealand batsman Martin Crowe developed a shortened version of Cricket “to provide to our spectators and TV viewers a game of cricket that was short in duration, very colourful, kept some old traditions and highlighted the best skills in the game.” Christened as Cricket Max, the format included 2 innings of 108-ball overs per team. There were a host of other rules like 11 players to be on the field at any one time with option of two on free interchange, no LBW, 4 stumps and 3 bails etc.

The first match of Cricket Max was played on February 5, 1996. It became a regular fixture of New Zealand domestic Cricket in the following years. India also played a Cricket Max match against New Zealand in 2002 and lost by 13 runs. But Crowe’s idea was perhaps ahead of time. The rules,which initially seemed to be revolutionary, gradually started to fail in sustaining the interest of the audience. It also did not get the support from the Cricket’s highest organising body. Therefore, even after having a promising start, Cricket Max was abandoned by the early-2000s.

Though becoming a defunct format, Cricket Max paved the way for T20 Cricket. It all started when, at the beginning of the 21st century, attendance at English county cricket matches considerably went down. The officials deduced that the new generation were gradually losing interest in Cricket because to them it was a sport for older generations. The biggest problem was where everything is available at the click of a button, a Cricket match simply took too long. Even for a One Day International a viewer would have to dedicate an entire day. The middle overs in ODIs turns to be a bit boring as the field restrictions are lifted and batsmen slow down.

The marketing committee of the England and Wales Cricket Board (ECB) suggested to find a way to cut off the ‘middle bits of the game’. Along with this came the suggestion to start a format of Cricket where a match would be 3-hour-long and fit into the evenings, even in the middle of a week. The idea finally became a reality in 2003 in the form of a country-wide tournament in England. 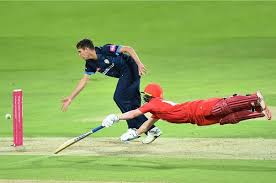 As a marketing tool, the English officials made Twenty20 Cup half a sporting event and half a fun fair. The shortest version of Cricket acted as a backdrop to bouncing castles, karaoke machines, swimming pools, and a long list of guest pop-star artists. In a short span of time T20 achieved its goal, of becoming massively popular and subsequently becoming a franchise-style tournament in almost every Test-playing nation.

The maiden tournament’s semifinals and the final were held on a single day, in front of a packed stadium in Trent Bridge. The following summer, the match between Middlesex and Surrey at Lord’s was watched by 27,000 people, the largest attendance at any county fixture in England in more than 50 years. Just six months later, New Zealand took on Australia at Auckland’s Eden Park in the first-ever T20 international match.

Australia captain Ricky Ponting felt the format would never become an important part of the international cricket calendar. Initially, India too refused to be involved in T20 internationals as BCCI believed that it diluted the importance of the 50-over format. However, a nail-biting, 5-run victory for India in the final of the inaugural ICC World T20 in South Africa in 2008 over arch-rivals Pakistan, planted the seeds of a love affair of the Indians with the T20 version. At present India is home to the largest franchise -based T20 tournament, the Indian Premier League or IPL, which is one of the most viewed tournaments on the planet. 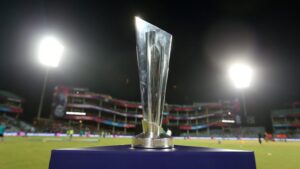 The ICC Men’s T20 World Cup is generally held every two years. Six tournaments have so far been played, and only the West Indies has won the tournament on multiple occasions. The 7th edition,which was to be held in 2020 in Australia was postponed due to global pandemic. ICC announced that both the 2020 and 2021 editions had each been postponed by one year- the 2020 tournament to be hosted by Australia was moved to November 2021 while the 2021 tournament to be hosted by India was moved to October 2022. Later, it was decided that Australia and India would host the tournaments, albeit in reverse order, with India hosting in 2021 and Australia in 2022.

Previous India gets its 21st Woman Grandmaster; but isn’t it still a gender disparity packaged as a title?
Next In this T20 World Cup, Cricket Namibia resurges under their ‘golden generation’ of players