With over a dozen player testing positive, India failed to adhere to the AFC guidelines of having a minimum of 13 players – 11 starters and two reserves; thus leaving with no other option than to pull out of the match against Chinese Taipei.

The preparation for the AFC Women’s Asian Cup was on for the last two years when the Indian Women’s Football team went to Europe, South America and other countries of Asia to play against some of the best sides. In the opener of the tournament India went for a draw against Iran.

But ahead of their second match in the tournament against Chinese Taipei, it was learnt that 12 players out of the 23 in the group and 4 members of the support staff tested COVID positive. With two players already out injured, and 12 testing positive, India had just nine players available for the match. 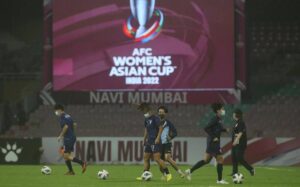 The Chinese Taipei players took the field at Navi Mumbai’s DY Patil Stadium at the official kick-off time, 7.30 pm. However, the Indian team did not turn up due to shortage of players in their side. According to Article 4.1 in the AFC special rules for the competition during pandemic it is clearly stated, “If a Participating Team/Participating Club has less than 13 participating players (including one goalkeeper) available for a match for any reason (whether or not relating to COVID-19), the relevant participating team/participating club shall not be able to participate in the match.”

India then tried to force a postponement but the rules state that it can only be granted only in ‘exceptional circumstances’. Praful Patel, the President of All India Football Federation (AIFF) said, “The promise on display in the first match against Iran was there for all to see, and am confident they will bounce back from this temporary setback.”

Several teams like Japan, South Korea, Myanmar, Thailand and Vietnam have also had COVID-19 positive cases, but no other team was hit like India inside the bio-bubble. AIFF General Secretary Kushal Das said, “We need to support them. They worked so hard and did whatever was asked for.”

However, the tournament will continue with 11 teams.