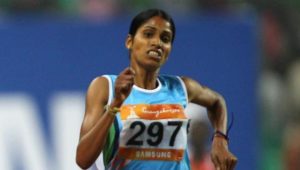 On the 3rd day of Asian Athletics Championships, India’s 3000m steeplechase athlete Sudha Singh clinched gold. India also grabbed 1 silver and 3 bronze to remain in the number one position in the medal tally.

The runner from Uttar Pradesh won her race in 9 minutes 59.47 seconds in front of the cheers of crowd at Kalinga Stadium in Bhubaneshwar. It was Sudha’s first gold in her fourth attempt in the Asian Athletics Championship. Earlier in 2009, 2011 and 2013, Sudha won silver. With this win, Sudha sealed a berth in World Championships to be held in London next month.

In 400m hurdles, Anu Raghavan gave India silver after she clocked 57.22 seconds. It was a fine performance from Anu who finished the race just behind favourite Nguyen Thi,

Triple jumper NV Sheena and men’s 400m hurdler Jabir MP won the other two bronze for India.  Sheena grabbed her medal in her final effort of 13.42m. On the other hand, Jabir was a surprise winner who clocked his personal best of 50.22 seconds to win the bronze.