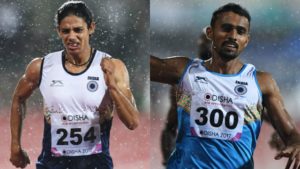 After a superb show in the opening day with 2 gold, 1 silver and 4 bronze, India increased their tally clinching 4 gold, 2 silver and 2 bronze on the rain-soaked Day 2 of the Asian Championship at Kalinga Stadium in Bhubaneshwar. Indian quarter milers, in both the men’s and women’s section won gold. The girl from Haryana, Nirmala Sheoran began the gold spree for India by winning the women 400m clocking 52.01 seconds and was soon followed by national champion Muhammad Anas in the 400 men’s event. Muhammad won the gold by clocking clocking 45.77 seconds. But it was not the end of medals in 400m. Anas’ training partner Rajiv Arokia won the silver in he event by clocking 46.14 seconds while in the women’s section Jisna Mathew added a bronze. It was Jisna’s first major medal in the senior level. 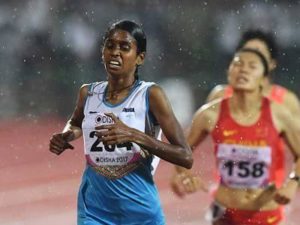 P U Chitra and Ajay Kumar Saroj won gold in their respective 1500m. The 22-year-old Kerala girl Chitra clocked 4 minute 17.92 seconds to win the gold while her male counterpart Ajay Kumar finished the race in 3 minutes 45.85 seconds.All the gold medallists automatically qualifies for the WOrld Championship to be held in London next month.

But woman sprinter Dutee Chand, who is embroiled in a gender case, disappointed a bit as she settled for a bronze in 100m. In front of her home crowd, Dutee clocked 11.52 secs.

India’s best came way back in the 1985 Jakarta edition of the Championship where they won total 22 medals with 10 gold, 5 silver and 7 bronze.