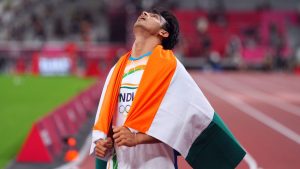 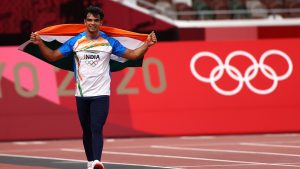 Neeraj Chopra recorded the final-winning throw of 87.58m in his second attempt. His first attempt of 87.03m would have been enough for him to win the gold medal. However, Neeraj bettered that score with his second attempt, when he recorded a mammoth 87.58m.

Neeraj ran around the pitch wrapped in the tricolour after this historic victory. Jakub Vadlejch (86.67m) and Vítězslav Veselý (85.44m), both from the Czech Republic filled up the remaining two spots on the podium. This is India’s first-ever Olympic medal in Athletics.

This incredible feat takes India’s medal tally to 7(1 Gold, 2 Silver, and 4 Bronze), which is their best ever medal tally at the Olympics.

Previous Bajrang Punia wins bronze; becomes the sixth Indian grappler to bag an Olympic medal
Next “Even if it’s not exactly a podium finish, will maybe bring eyes to the sport”- Aditi Ashok