UPDATES
Home / EXCLUSIVES / “Even if it’s not exactly a podium finish, will maybe bring eyes to the sport”- Aditi Ashok

“Even if it’s not exactly a podium finish, will maybe bring eyes to the sport”- Aditi Ashok

It was a narrow miss but a broad display. Aditi Ashok, after finishing fourth in the Olympics, has turned into the poster girl of new-age sport in India. 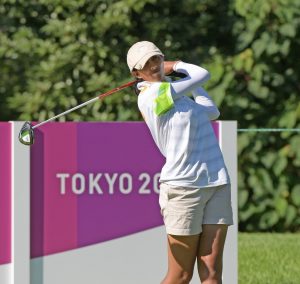 Through the Tokyo Olympics, Aditi Ashok’s putting held, but more importantly, the mind was in the right place. The two aspects, so critical at sport’s highest level, were so apparent that even foreign commentators, often oblivious to an Indian athlete’s efforts, were left gushing over her poise. A lot has been said and written about Aditi’s transformation from a wide-eyed 18-year-old making her Olympic debut and finishing 41st at Rio de Janerio  to a rock-solid contender at the Kasumigaseki Country Club in Tokyo. But wading through the talk of Aditi joining the select band of elite Indian athletes who have finished fourth at the Olympics, some thought should go into the impact of this result on Golf’s standing in our society. Aditi’s finish should be a shot in the arm for a sport that is not more than a speck on the nation’s fabric.

Sportsavour presents excerpts from an interview of Aditi Ashok after her final round action.

Summing up the day-

Aditi: I didn’t really drive the ball very good and then it’s hard to get birdie putts or hit greens when you’re not in the fairway. So, yeah, that was definitely the hardest part to make a score today.

Things slipped out on 15th and 16th hole… 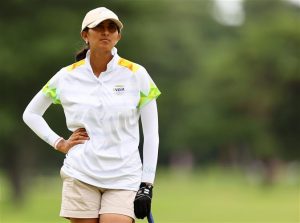 Aditi: Yeah, 15 was okay, it was nothing, I mean I was just scrambling, I was in between clubs so I hit one more and it went over. But I don’t think it was that bad. I still made a par, so it’s fine. But just generally like 15 also I missed the fairway so I was just missing so many fairways. The front nine I just hit one and I think the back nine I must have hit maybe a couple more, maybe three or four more. So that was what was bad today, kind of put me out of position so I couldn’t get close to the flag.

Aditi: Yeah, 17 was perfect. I hit it exactly the speed I wanted, the line I wanted, I just — maybe I made too many through the four rounds, golfing gods were like, okay, we’re not going to give her this one. But no, I just tried my best, even the last hole, although it was really out of range, it was almost a long putt, but I still tried to give it a chance. So yeah, I think I gave it my best attempt.

On the last hole…

Aditi: Not much, actually. I got a really good lie off the tee, I hit the fairway finally and then I had a good club in, so it was a good number too, so only then I thought that, okay, I had a chance to make a birdie and I pulled it a hair left, also because there was bunker and water on right but still I gave myself a birdie putt and that putt I think, I mean I wanted to hole it and I gave my best attempt, it just, it’s hard to force the issue when you’re like 30 feet away.

Joining the club of finishing fourth at the Olympics… 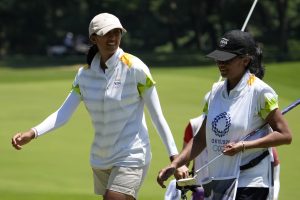 Aditi: No, I didn’t know that actually obviously now that I’ve joined that not so — you don’t want to join that club. But yeah, I guess I’ve joined it. But no I think it’s good, just even top 5 or top 10 at an Olympics is really good. Because you know that sport or that person has a medal chance. So just having more top finishes, even if it’s not exactly a podium finish, will maybe bring eyes to the sport and more support, more kids pick up more, whatever, that helps grow the game.

Aditi: I think when my dad’s there, he knows my game a lot more, probably sometimes more than I know myself, so I always feel compelled to rely on him sometimes. Whereas this week I knew my mom’s there, I could ask her anything, but in terms of like Golf advice, she was not be able to help me as much as my dad. So I guess was committed to my decisions more and being more decisive on my own.

Emotions when India woke up and backed Golf at 4am…

Aditi: Going into the round I didn’t think about it much, it was fine, but obviously coming in I tried my best to like hole the last few putts and just knowing because in a regular tournament whether you finish second or fourth it really doesn’t matter, no one cares. But like at this event you need to be in the top 3. I didn’t leave anything out there, I think I gave it my hundred percent, but, yeah, fourth at an Olympics where they give out three medals kind of sucks. When I started Golf I never dreamt of being or contending at the Olympics; Golf wasn’t even an Olympic sport. So sometimes you just pick it up and work hard and have fun every day and sometimes you get here.

The exclusive news portal on Indian Golf that goes beyond mundane news and views.
Previous It’s an individual Olympic gold for India; Neeraj Chopra touches the summit after 13 years
Next Talented Ananya Gupta wants to grow as an athlete along with the ‘natural growth’ of Dueball In India