UPDATES
Home / EXCLUSIVES / BEYOND THE LIMITS / The men won, the eves lost; but with heads high, both scripted a turn around for Indian Hockey

The men won, the eves lost; but with heads high, both scripted a turn around for Indian Hockey

The Indian Men’s Hockey team won their bronze medal match against Germany by 5-4, whereas the Women’s Team went down to Great Britain by 4-3 at the 2020 Tokyo Olympics. But the spirited performance by both the teams in this Olympics will continue to inspire generations.

Win for the Men

In the past the Indian Men’s Hockey team used to dominate every field and was filled with incredible players in every position. Starting from the late 1920s to four decades later, till the 1980s, the Indian men’s team was easily the most dominant Hockey side in the world. It was in 1980 when India last won an Olympic medal in Men’s hockey, when they emerged as the winners of the event. So the bronze medal at the 2020 Tokyo Olympics is historic and almost like a ‘rebirth’ of Hockey in India. 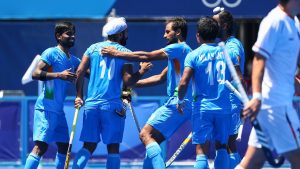 The Indian men’s team seemed down and out when they were trailing 1-3. However, they made an amazing comeback to go on and defeat the Germans 5-4. It was a thrilling comeback by the Indians, with Simranjeet Singh scoring a brace, and one goal each from Hardik Singh, Harmanpreet Singh, and Rupinder Pal Singh.

The Germans were quick out of the blocks and in the second minute of the 1st quarter, they had taken an early lead through Timur Oruz.  India had to wait till the 17th minute, before Simranjeet scored to make this all square at 1-1. However, Germany scored twice more in the second quarter, to make the score 3-1 in their favour.

It was Hardik, who pulled a goal back, so that India were now losing by just a solitary goal. With the score reading 2-3, Harmanpreet found the back of the net, which tied up the scores again at 3-3, in the second quarter. Then Rupinder converted a penalty stroke in the third quarter, and India led for the first time in the match 4-3.  Going into the final quarter, Simranjeet notched up his second goal of the match, to give India a 2-goal cushion and make it 5-3. 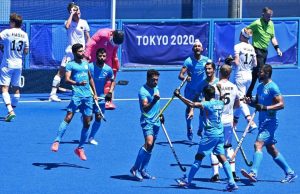 Germany put up a strong fight in the last quarter and ended up getting a number of penalty corners. Lukas Windfeder halved the deficit in the final quarter, when he converted a penalty corner. But they could not breach the organised and stoic Indian defense anymore, and India kept their goal lead till the end of the match.

This is what Indian captain Manpreet Singh had to say after the win, “We were speechless when the whistle went off. It was a great moment for us and also for the nation. I think the players really worked hard in this Olympics and they deserve this.”

While the men won the bronze after a lean medal period of 41 years in the Olympics, the women played their first-ever bronze medal match in the Olympics. Even before the match started, Indian Women made history as they became the first Women’s Hockey Team from the country to make it to the semi final of the Olympics. The Rani Rampal led team lost a high-voltage match against Argentina in the semi final but were determined to give a stellar performance against the defending champion Great Britain in the bronze medal match in Tokyo 2020.

India went down 0-2 in the first quarter, but Sjoerd Marijne’s women came back strongly in the second quarter scoring  3 goals in 6 minutes to lead 3-2. Gurjit Kaur scored a brace and Vandana Kataria scored the other goal. But the World No 4 team Great Britain had full control of the match from then onwards. They tied in the third quarter and went up again with an early goal in the 4th quarter. India were unable to find the equaliser to force a shoot-off. 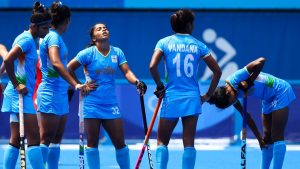 The Indian eves could not hold back their tears after they lost the match in Tokyo. The tournament is a watershed moment for them because not many gave them a chance of winning a medal or even making the knockout. But they exceeded all expectations and made the rest of the world take notice of them.

After the match, the Indian Women’s Hockey Team head coach, Sjoerd Marijne took to social media to write: “We did not win a medal, but I think we have won something bigger. We have made Indians proud again and we inspired millions of girls that dreams CAN come true as long as you work hard for it and believe it! Thanks for all the support!”

While every single player of both the teams has put in an unbelievable effort, there are two players who have really come to the fore. Both the goalies PR Sreejesh and Savita Punia created a huge impact throughout the tournament.

There have been several times throughout India’s Olympic campaign where Sreejesh bailed his team out of tough spots. In the bronze medal match, India had to defend 13 penalty corners and with Sreejesh guarding the post, they only let in a solitary goal from all of them. Sreejesh saved a penalty corner that Germany had been awarded in the last few seconds of the match. With the ball veering away from goal after the save, the Indians won the game and Sreejesh was hailed as the ‘Great Wall of India.’ 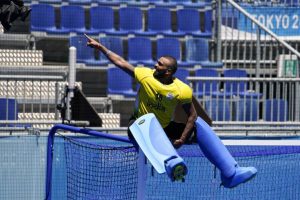 At the Oi Hockey Stadium North Pitch in Tokyo, with his teammates celebrating the incredible victory, an ecstatic Sreejesh climbed on top of the goalpost. When asked the reason behind the action, the custodian replied, “That’s my place. That’s where I spent my entire life. I think I just wanted to showcase that I am the owner of this post now and I just celebrated because the frustration, the sorrows, me and my post share it together.” 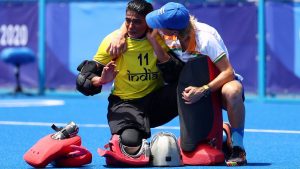 On the other hand, Savita Punia was in tears after the team’s heartbreaking loss against Great Britain. Punia, who hails from Haryana, thwarted every Australian attack by saving nine crucial penalty corners against them to help India reach the semi final of the Olympics. In the bronze medal match, she denied Great Britain the chance to score on at least three occasions in the first quarter.

Both the win and the loss will be remembered not only by the Hockey fanatics but by every Indian. The men and the women played with all their hearts, with fighting spirit and heads up. With nothing to lose from here, Hockey India is sure to carry forward its rich legacy in the future.