Cyclone Jawad could not stop Argentina to win the Junior Hockey World Cup title. It weakened, making the Argentines stronger as they displayed a superb play of sticks against Germany at the Kalinga Stadium in Bhubaneshwar. 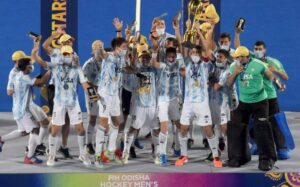 Coached by Olympic gold medallist Lucas Rey, Argentina controlled the game smartly by sticking to the basic, but forming a strong defence and moves to ride past Germany. Lautaro Domene flicked high in the opening quarter and scored off a variation in the second to take Argentina to a 2-0lead.

Germany raided through hard hits and quick passes as Julius Hayner tapped in a loose ball and Masi Pfandt converted a short corner to make 2-2.

However, Domene completed a hat-trick and Franco Agostini struck in the final minute to seal the win for Argentina. Germany finished second after 42 years.

India, on the other hand, lost to France for the second time in this edition. The host conceded as many as 14 penalty corners and trailed 0-1 after the second quarter as French captain Timothee Clement converted his team’s fifth short corner. Clement went on to complete a hat-trick. Sudeep Chirmako’s 42nd-minute goal gave some hope but the host could not capitalise on several chances.

Previous Junior Hockey World Cup: Germany ends India’s dream to win the title for the second time in a row
Next Eileen Ash- the ‘remarkable woman’ of English Cricket who lived 110 years of ‘extraordinary life’