Defending champion India put on a fighting display to defeat a formidable Belgium 1-0 and enter the semifinals of the Men’s Junior Hockey World Cup at the Kalinga Stadium. 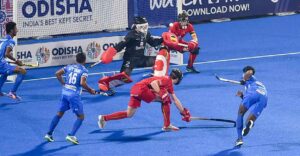 Five years ago, Belgium lost to India in the final of the Junior World Cup in Lucknow and this year too the outcome is no different. India withstood the pressure well in the opening quarter. The Indian defence held tight while India’s two goalkeepers, Pawan and Prashant Chauhan put up a solid performance under the bar.

India took lead in the seventh minute of the second quarter when Shradhanand Tiwari converted India’s only penalty corner into a goal. Sanjay turned the ball to Tiwari and the latter flicked high into the right corner. The Belgians created several scoring chances but the Indians made a combined effort to deny Belgium any advantage.

India will face Germany in the semifinal, while Argentina will meet France in the other semifinal.