Junior Hockey World Cup: India register their first win in the tournament by winning against Canada

India bounced back after their loss against France by defeating Canada 13-1 at the Junior Hockey World Cup. 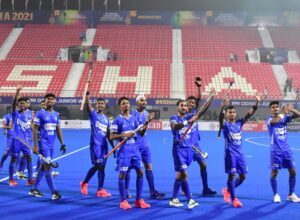 As India won with a huge margin against Canada, it became the second-highest number of goals scored in a single match at a Men’s Hockey Junior World Cup since Spain beat the USA 17-0 earlier in the day. Vice-captain Sanjay and Araijeet Singh Hundal scored a hat-trick each while Uttam Singh and Shardanand Tiwai scored two goals each. The other goals were scored by Vivek Sagar Prasad, Maninder Singh and Abhishek Lakra.

The win put India second with three points in two matches in Pool B.On the other hand, this loss knocked Canada out of the tournament as this is their second-consecutive defeat – they had earlier lost 1-0 to Poland.

India will next play against Poland in their final pool match on 27th November 2021, with a draw enough to take them through to the quarter-finals.