Defending champion India will face toppers of Group A, Belgium, in the quarter final in Junior Hockey World Cup.

Vice Captain Sanjay opened the scoring with a strong drag flick. He has been in fine set piece form in this tournament. He already scored a hat-trick in each of the first couple of matches. His early goal allowed India to calm their nerves and put in a solid performance. He also scored the 7th goal later on to bring up his total tally in the tournament, up to 8. 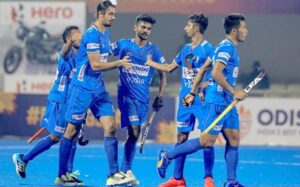 Sanjay had 2 of his teammates match his feat of scoring a brace on the night. Both Hundal Araijeet Singh and Sudeep scored a couple of goals each. The remaining 2 goals were scored by Sharda Nand Tiwari and Uttam Singh. Singh scored the fourth goal to get his name on the scoresheet, but the goal should be chalked down to the brilliance of captain Vivek Sagar Prasad. His sensational stick-work set up Singh’s finish – “3D skills“, followed by a perfectly timed cut-back.

The Indians had a commanding 3-0 lead at halftime which the Polish players simply could never recover from. However, they did put up a brave fight. They had a splendid spell in the fourth quarter, and their brilliance was rewarded with a goal. Wojciech Rutkowski scored Poland’s opener with a drag flick. They showed great character to put in a second goal. Robert Pawlak made it 6-2 with a splendid reverse hit from the right flank, with India down to 10. But India did not let them back into the game and put in 2 more, to make the final score 8-2.

The Boys will be flying high on confidence after two emphatic wins in the last couple of matches. They should, however, not get carried away as Belgium will be a tough test in the quarter finals. But if they can keep churning out these types of performances, they will surely be able to secure the win.

Previous Junior Hockey World Cup: India register their first win in the tournament by winning against Canada
Next Sir Frank Williams- A life simply extraordinary, will forever be remembered as the ‘boss’ of F1