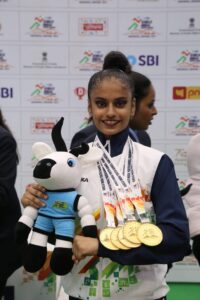 Unnati Hooda, the shuttler from Haryana who became the youngest Indian to make it to the Uber Cup team, defeated World Junior No 1 Tasnim Mir to clinch the Girls’ Singles crown at the ongoing KIYG. In the boys’ badminton singles event, Darshan Pujari of Maharashtra claimed the title with a 21-15, 22-20 win over S Rithvik Sanjeevi of Tamil Nadu.

Andaman and Nicobar’s Celestina Chelobroy won her third Cycling gold on the second day of the event at the Games.
Earlier she won two gold medals at the Team Sprint and Individual Sprint 200m events. She wrapped up by clinching the Keirin 1500m gold.