Two-min rounds, 12-ounce gloves and a 15 year long-wait. Mike Tyson, at 54, returns to the ring one more time, as will another one of Boxing’s greatest pound for pound fighters, Roy Jones Jr.

The Iron Mike- Mike Tyson retired at only 38 following an astonishing loss to Kevin McBride in 2005. “I realised, I don’t think I have it any more,” he explained in a remarkably honest post-fight interview before hanging up his gloves. Post-boxing, he has been involved in various different capacities, from endorsement deals to film/TV acting cameos, even launching his own hugely profitable cannabis business.

Roy Jones Jr, on the other hand, has been retired for less than 30 months, but is 51 years old and besides his hall-of-fame worthy boxing career, has built a credible portfolio in acting as well as rapping. 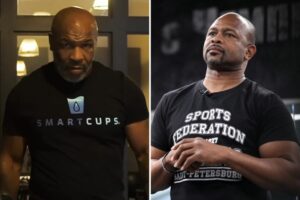 The eight-round exhibition bout — originally scheduled for September 12 in Carson, California — will take place on November 28 at the Staples Center behind closed doors.

The decision to resume rigorous Boxing training and lace up the gloves looks set to be part of Tyson’s planned “Legends Only” venture, in which he hopes to convince past stars of various sports to return to the spotlight.

It is essentially an exhibition bout, with the plan being to stop the bout if either fighter is cut or significantly injured but that has not stopped the two fighters from trying to sell the contest.

Neither boxers will be wearing headgear, but the switch to twelve-ounce gloves is safety-oriented. Heavyweight professional boxers generally use 10-ounce gloves in fights. Extra weight means extra padding, so larger gloves take longer to compress, and have more surface area which spreads the impact of a blow to reduce peak stresses on the body.

To raise the stakes, the World Boxing Council (WBC) were quick to react and the winner of the bout will receive the WBC Frontline Battle Belt, a custom-made title exclusively for this fight.

The fight will be evaluated through WBC’s remote scoring system. Each round will be scored and announced to the public, while the California State Athletic Commission will oversee, regulate and sanction. Quite an interesting prospect given the controversial nature of scoring in the sport. MMA has already witnessed open scoring but for boxing, it is set to be a first.

The remainder of the card features three prelim fights, comprising exciting prospects such as lightweight Jamaine Ortiz and featherweight Edward Vasquez. In the cruiser weight co-main event, YouTuber Jake Paul will take on former NBA player Nate Robinson. Paul made his Pro-boxing debut in January, knocking out fellow Internet personality ‘AnEsonGib’ in the first round. The 23-year-old beat another YouTuber Deji in an amateur bout in 2018. 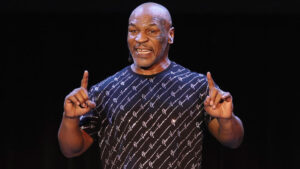 Other than a few videos featuring Robinson hitting the mitts, not much is known about the 36-year-old’s Boxing skills. Another undercard match-up pits Viddal Riley against Rashad Coulter. Riley was a silver medallist at the EUBC European Junior Boxing Championships in 2013 for England. American Coulter is a former UFC fighter with an MMA record of 9 wins and 5 losses.

In the Boxing main-event, Jones Jr. has the edge though being three years younger and thirty months off the sport in comparison to fifteen years for Tyson.  Tyson may be well past his prime but with an incredible transformation and now in the shape of his life, time will tell if he can turn back the clock, one last time.

Previous Does immune system respond to exercise? The answer lies deep as the Covid threat still lurks
Next To him, Chess is a metaphor for life; Robert Katende transforms life through Chess