“My Asian Games medal boosted the confidence of many Indian swimmers…..” Sandeep Sejwal

Sandeep Sejwal conquered the Indian breaststroke scene quite for sometime. In 2009, Sandeep won 2 silvers and I bronze in Asian Age Groups Swimming Championships in Tokyo while creating national record in 50m, 100m and 200m in breaststroke. Since then he kept on representing India in various tournaments. In 2014, he won Asian Games bronze medal in 50m breaststroke.He became the first-ever breast stroker from India to qualify for the Olympics. Sandeep swam 100m and 200nm breaststroke at the Beijing Olympic Games in 2008 and in London Olympics in 2012. In an exclusive interview to Sportsavour, Sandeep speaks about his achievements and the swimming scenario of India.

I have been lucky to have very supportive people around me whether I win or lose. My coach Nihar Ameen and my mother have only said good things about my performances over the years which have helped me gain confidence to swim at this level. Also I had practiced hard in my initial years and still now continue to do so with the same zeal. I did put a lot of hard work in the process. What I did is something all sportsperson do to excel in their respective fields.

It is a dream for every athlete to win medals for their country and the same is for me. It’s a sweet dream that seem to be never ending

I waited for years for that moment. It was the most memorable and the most special medal for me and my country because we dont have a lot of medals in swimming at this stage. My win boosted the confidence of many Indian swimmers to win in international competitions. 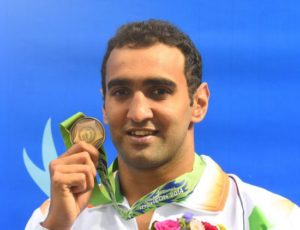 Since the time I started swimming I have been in love with this stroke. I have always wanted to learn more of it. So, I stuck to learning it for 22 yrs and it helped me win an Asian Games medal.

We have world class facilities in India. Its just that we don’t get to utilise most of them and also we don’t have a proper staff base to support our training (like physio, doctors, sports nutritionists etc).

The swimming federation chose him as a wild card entry. I cant really give a reason for why he was qualified. But he worked really hard to get qualified. I felt happy that the federation at least chose someone to represent India in swimming at the Olympics.

2020 is 3 yrs from now I don’t see myself pushing again for another Olympics..

People don’t say that kind of stuff but the media motivates them to do so. We can’t control our media such kind of negativity will always affect the mindset of any athlete.