(My English friend might agree or not, but for me Gulli Danda is the king of all games. Neither a lawn or a court, nor any net or other contrivance is needed. You just sever a branch from a tree and make a gilli out of it. Two are enough to start a game.)

Munshi Premchand’s unique portrayal of Gilli Danda in his short story mirrors many of our childhood memories. Not only for the author but perhaps for many of us- “among all the sweetest memories of childhood this is the sweetest……”

Gilli Danda is one of the simplest outdoor games. With a Danda (long wooden stick) in hand, a player inclines a Gilli (a small oval shaped piece of wood) on a stone. Then he tosses the Gilli in the air with the Danda and while it is in air, he strikes it hard to transport it as far as possible. He runs fast to a marked point before the Gilli is retrieved. But if an opponent player catches it airborne, then the striker is out.

With this description we Indians can claim that the origin of cricket lies in our very own Gilli Danda. But opinions differ. A similar game named Tip-cat was played in ancient England and later in North America. In the First Worcester Edition of 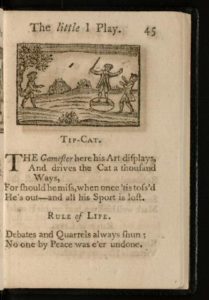 A Little Pretty Pocket-Book, Intended for the Instruction and Amusement of Little Master Tommy, and Pretty Miss Polly there was a picture and description of Tip-cat which suggested that it was an eighteenth-century children’s game played in some European nations. Later on, this game might have developed into cricket and baseball. However, in India, the beginning of Gilli Danda dates back to the period of Mauryan Empire. Historical references suggest that the common people played the game on streets and sometimes members of royal family participated along with them. But by the passing of time, social stigma forced the higher strata to abandon it; thus, making it completely a common man’s game.

India was a vast country with a major portion of South Asia under its belt. But as the geographical boundaries were drawn, India was divided and new countries came into existence. However, people never lost the fervor for Gilli Danda. The original game spread from India to its neighbouring countries and it came to be known as Danguli in Bangladesh, Dandi-Biyo in Nepal, Lappa-Duggi in Afghanistan and Kitti-Pullu in Sri Lanka. But with different names came different regional rules. Players played as per their own rules and thus, there was no uniform expansion of the game. It continued to remain as an amateur game only played for entertainment and fun.

Gilli Danda International Federation headquartered in Noida in Uttar Pradesh. The Federation is working on restoring this age-old traditional Indian game by drafting a rule book and promoting it professionally. So, with this new initiative, we hope Gilli Danda gains popularity and today’s generation at least know what this game actually is.

Previous Indian Chess in June 2017
Next “My Asian Games medal boosted the confidence of many Indian swimmers…..” Sandeep Sejwal