Sutirtha Mukherjee won a deserving gold at the National Games 2022 when she defeated Sreeja Akula of Telangana with a resounding 11-8, 11-7, 11-8, 12-14, 11-9 triumph in the summit clash. Sutirtha also won the Women’s Doubles pairing with Ayhika Mukherjee. They defeated the Karanataka pair of Kushi Viswanath and Yashaswini Ghorpade 3-0. Sutirtha won three gold medals, including in the team event, that helped West Bengal top the medal chart with eight medals—four gold, one silver and three bronze.

In the Men’s Doubles Ronit Bhanja and Jeet Chandra of West Bengal made it a one-sided affair against their state mates Arjun Ghosh and Anirban Ghosh. Ronit and Jeet won 3-0 and only took 15 minutes to win comfortably. 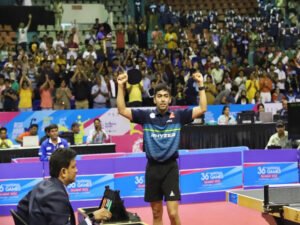 Previous Jhulan Goswami drops curtain on her career after scripting her own narrative on women’s cricket
Next When PV Sindhu tries her hands on shooting; Anju Bobby George accompanies her