When PV Sindhu tries her hands on shooting; Anju Bobby George accompanies her 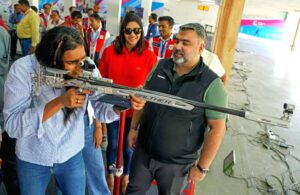 It was a different ball game for Badminton star PV Sindhu. During her presence at the National Games 2022, she visited the Ahmedabad Military and Training Association in Khanpur to meet the shooters and get a hands-on experience of the sport. World Athletics Championship bronze medal winner Anju Bobby George and Commonwealth Games medallist Trupti Murgunde also visited the range. London 2012 bronze medallist Gagan Narang familiarised the trio with a few tricks of the trade.

They first tried to hit the target using an air rifle at the 25m range. Sindhu went first, followed by Anju – who misfired into the tarmac – and Trupti. Gagan who is an expert in 10m air rifle shooting, ended up with a high-8.

The star athletes also visited the 10m air rifle range, where they took some time out for a few selfies with the athletes and other dignitaries. The members of the Rifle Club felicitated the guests.