UPDATES
Home / WORLD CUP / FOOTBALL / Portugal in a tricky situation; Ronaldo may not even get to play in Qatar World Cup

Portugal in a tricky situation; Ronaldo may not even get to play in Qatar World Cup

Looking set to book a place in the 2022 Qatar World Cup, needing only a draw against Serbia, Portugal had to digest a 2-1 defeat, after conceding in the 90th minute. 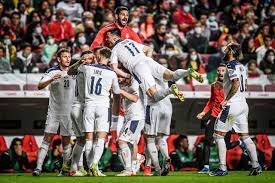 Playing at home in Lisbon, Portugal hit the ground running at the Estadio Da Luz (Stadium of Light). Playing at home, with the likes of Ronaldo, Bernardo Silva, Bruno Fernandes, and others in their ranks, the hosts were the clear favourites to win the match. All they needed was a draw to finish on top and qualify for Qatar. They went ahead after just a couple of minutes thanks to a Renato Sanches goal. Serbia, however, had other plans. As they steadily started to have more and more influence on the game, they found their equaliser through Ajax-man Dusan Tadic. Later, in the 90th minute Serbia found their winner through Aleksander Mitrovic.

This was Portugal’s second draw after already having drawn against the ‘already-eliminated’ Ireland. They entered the final round, with the same number of points as Serbia, after 7 matches. Owing to their superior goal difference, they could qualify for the World Cup with just a draw. But after the loss, they will have to face the dreaded playoffs with the remaining nine group runner-ups and the 2 group winners from the UEFA Nations League.

Some of the front pages of Portuguese newspapers had the words “Miserable” and “World Shame” emblazoned on them. After failing to qualify for the World Cup in the period from 1990-1998, Portugal has been a mainstay in Football’s greatest tournament since 2002. Veteran goalkeeper Rui Patrício had to face a lot of criticism for Serbia’s equaliser, as he couldn’t hold on to the ball when Tadic’s shot deflected off of a Portugal defender. Coach Fernando Santos was under the pump as well. 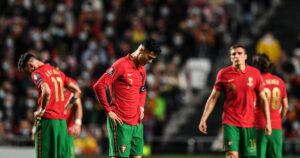 However, the man for whom the eyes of millions of fans around the world were welling up, was Christiano Ronaldo. He was visibly upset after conceding the late goal. He could be seen screaming and complaining at his teammates as they waited for the game to resume. After the final whistle blew, he cut a forlorn figure, sitting on the field by himself, shaking his head in frustration and looking desolate. He took to Instagram after the loss, “Football has shown us time and time again that sometimes the most difficult paths are the ones that lead us to the most desired outcomes….The goal of being in the 2022 World Cup is still very much alive and we know what we have to do to get there.”

If Portugal do manage to qualify for Qatar, it will be Ronaldo’s fifth straight appearance at the World Cup, after he first represented Portugal at the World Cup, in 2006. In all probability, this will also be the last World Cup for the 36-year-old veteran, who seems to be nearing the end of his illustrious and almost unimaginable playing career.

Portugal’s woes seem very reminiscent of Italy back in 2017, when they only managed a 0-0 draw against Sweden, and as a result failed to qualify for the 2018 World Cup for the first time since 1958. Credit to Italy they began their rebuild immediately and went on to become the winners of Euro 2020. Portugal have fallen into a tricky situation, and it is quite likely that Ronaldo may not even get to play his last World Cup. A lot will surely depend on him when his team feature in the playoffs, next year.