With every fall she rises; its out of the world story of Shital Mahajan

It was 18th April 2004. A 22-year old Indian with immense courage dived out from a Russian helicopter. She became the first woman to jump from the geographical North Pole at -37 degrees centigrade without any formal skydiving training. It was just a beginning. Two years later, on 15th December 2006, she performed an accelerated free fall jump. That was over the Antarctic – South Pole. At that time she became the youngest woman to achieve such a feat. Her record of 18 national records and 5 world records speaks for herself. She is Shital Mahajan- a name that has to be famous but remains in oblivion. 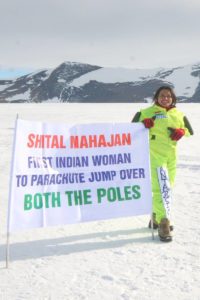 zeal left her mesmerized. She decided to take to skydiving as a way to fulfill her thought of doing something different in life. But there was no training facility in India as it was restricted only for the defence forces. It was Commander Oberh’s continuous support that kept her spirit high. Simultaneously, she read books, talked to people and went through all possible online searches to prepare herself for the North Pole jump.

But coming from a conservative Indian family, things were not too smooth for her. She faced resistance from her parents for opting a precarious career not meant for the ‘weaker gender’. But Shital Mahajan, in a way, disapproved her parents’ denial. She obstinately went for the North Pole jump. It was for the first time she boarded an airplane and that too for a destination as far as North Pole. The journey was via Frankfurt, Tromso and Longyearbyen. But even after reaching there her Russian instructor was skeptical about her capability. As Shital was unconditionally ready, she convinced her instructor. She was successful in following her dream.

It was her passion that proved her right not only in front of the instructor, but also in front of her parents. They were convinced that their girl was made for skydiving. But what mattered to Shital Mahajan most was when the Maharashtra government acknowledged her talent and agreed to sponsor her training in Arizona, USA. In the meantime, Shital met Vaibhav Rane, a software engineer based in Finland and a skydive enthusiast. In 2008, they got married in a unique ceremony that took place in the sky in a hot-air balloon. It was the first of-its-kind in India. People were in awe when they performed such a marriage. Shital and Vaibhav have their twin sons, Vrushabh and Vaishnav.

During her training in Arizona, Shital completed 250 jumps along with 6 hours of wind tunnel training and became a US-certified A, B, C and D skydiver. Once she received professional training, records fell like nine-pins in front of this brave Indian.  Mahajan did a wing-suit jump in 2010 under the guidance of Jari Kuosma, the developer of modern and commercial wing suit. Another important day in her life was 23 October 2011. On that day she became the first person to perform skydiving from a height as high as 5800 ft from Hot-Air Balloon. 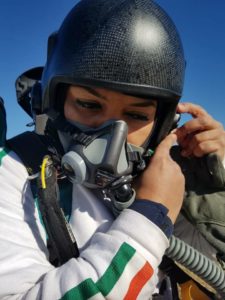 Shital also holds several team records. She was the leader of a team that created world record of performing free fall parachute jump over Antarctica as a team. She also led a team of 89 Indian skydivers to achieve a record for maximum tandem jumps in one day and also 35 tandem jumps in one hour in Spain. On 20th May 2017, Shital made us proud again by becoming the first Indian civilian woman to perform High Altitude Low Opening (HALO) Jump. She dived from 30000ft in -35 degree celsius to enjoy 2 minutes 20 seconds of her life.

Shital Mahajan is really an inspiration and can be considered a legend of our times. The immense courage and strong will power she shows with every jump, place her among the best in the league. 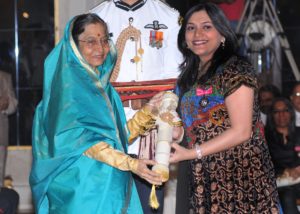 But this Padmashri Awardee wants to extend skydiving among many more like her. So she started her own Phoenix Skydiving Academy where she trains students about professional diving. As a follower of Dan Brodsky Chenfeld, the 6-time World Skydiving Champion and a believer of spreading knowledge, Shital also wants to spread her knowledge to anybody who is interested in this sport. She also wants proper recognition of this sport and is urging the government for the last 11 years to bring adventure sport under Sports Ministry rather than keeping it under Youth Affairs.

Her fight for the sport gains momentum with every jump of hers. Shital performs her acts from such heights where troposphere ends, fingers get frozen, ears get pressurized, where brain thinks only about opening the parachute and when there is a thin line between life and death. But still there is nothing to stop this courageous lady. Shital dreams of jumping to the Earth from a helium balloon in the stratosphere just as Australian daredevil Felix Baumgartner did in 2012. Shital wants to be a spectator of that amazing landscape, she wants to witness the Earth from above, she really wants to be a part of something that is out of this world in true sense.

Previous Asian Athletics Championship to start from today
Next India win against Sri Lanka, make it 4 out of 4